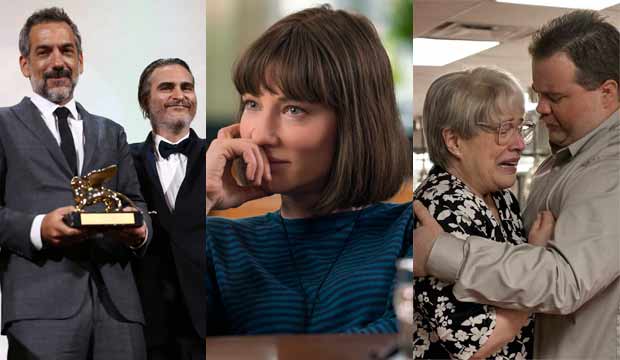 Gold Derby’s users did a great job predicting the Golden Globe nominees, which were announced on Monday morning, December 9. Out of 11 film categories we were forecasting totaling 55 nominations in all, our official odds only missed nine times, and most of those were near misses. But they were misses nonetheless — you can’t win ’em all. Scroll down to see the nominees who took us by surprise, and check out the complete list of nominees here.

Arguably the biggest shock was Todd Phillips‘s Best Director nomination for “Joker.” The controversial filmmaker was nominated ahead of Noah Baumbach (“Marriage Story”), Greta Gerwig (“Little Women”), Taika Waititi (“Jojo Rabbit”) and Pedro Almodovar (“Pain and Glory”), all of whom ranked higher in our odds. He’s joined in that category by expected nominees Martin Scorsese (“The Irishman”), Bong Joon Ho (“Parasite”), Sam Mendes (“1917”) and Quentin Tarantino (“Once Upon a Time in Hollywood”).

“The Two Popes” also exceeded our expectations by earning four nominations. We were only predicting it for one, but it was on the bubble for the other three so they weren’t total shockers. We were betting on Anthony Hopkins‘s nomination for his supporting performance as Pope Benedict XVI, but we had it narrowly missing Best Film Drama, Best Film Drama Actor (Jonathan Pryce) and Best Screenplay. It made the cut in every case — oops!

Other surprises included Cate Blanchett (“Where’d You Go Bernadette?”) in the wide-open Best Film Comedy/Musical Actress race, Christian Bale (“Ford v Ferrari”) in the crowded contest for Best Film Drama Actor and Kathy Bates (“Richard Jewell”) for Best Film Supporting Actress following her win from the National Board of Review. And we didn’t anticipate “The Lion King’s” inclusion in Best Animated Feature: we gave it 100/1 odds, but in the race for Best Film Comedy/Musical since the photo-realistic CGI film had been widely perceived as “live-action.”

Check out our list of unexpected nominees below, and join the discussion on this and more with your fellow movie fans here in our forums.

BIG SURPRISES
These nominees got in despite being 100/1 underdogs in our odds.

CLOSE CALLS
We knew these contenders had a chance, but they weren’t among our top five predicted nominees.