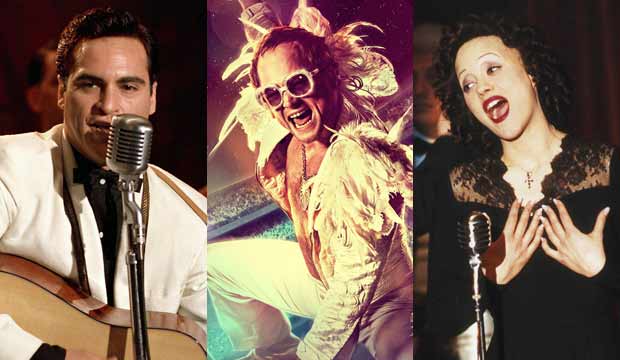 Starring in a musical biopic is a good way to win Best Film Comedy/Musical Actor at the Golden Globes. Jamie Foxx did it by playing Ray Charles in “Ray” (2004). Joaquin Phoenix did it the very next year as Johnny Cash in “Walk the Line” (2005). Now Taron Egerton could do it as Elton John in “Rocketman.”

Four of the Expert journalists we’ve polled from top media outlets are predicting Egerton to win: Erik Davis (Fandango), Joyce Eng (Gold Derby), Tariq Khan (Fox TV) and Scott Mantz (Collider). Another four Experts are betting on Leonardo DiCaprio (“Once Upon a Time in Hollywood”), while eight Experts agree with the general consensus that Eddie Murphy (“Dolemite is My Name”) is the man to beat.

But it’s not just Foxx and Phoenix who won Globes for playing real-life musical figures. Winners in other Globe categories have included Marion Cotillard as Edith Piaf (“La Vie en Rose”), Phoenix’s “Walk the Line” co-star Reese Witherspoon as June Carter, and most recently Rami Malek as Freddie Mercury (“Bohemian Rhapsody”). Malek’s performance was directed by Dexter Fletcher (who stepped in for Bryan Singer after on-set conflicts), just like Egerton’s was, so he’s got a pretty good track record all by himself.

“Rocketman” has two other Globe nominations — Best Film Comedy/Musical and Best Original Song for John’s “I’m Gonna Love Me Again” — which shows how much the Hollywood Foreign Press like the movie. And Egerton also earned a surprise SAG Award nomination. Those awards are decided by a completely different set of voters, but it means Egerton might be a stronger contender at the Oscars than we previously thought, so Globe voters may wish to plant their flag by awarding him before the academy’s nominations are announced. That would be something for Egerton to sing about.