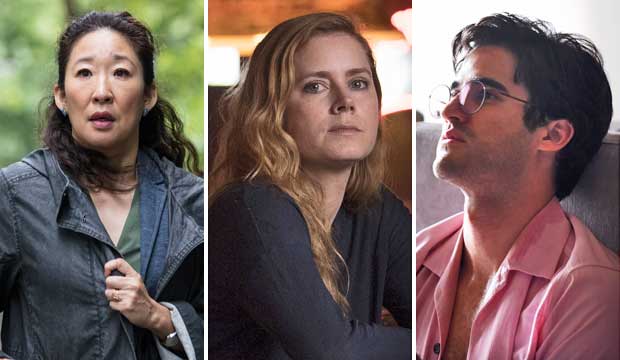 Don’t expect a sweep when the Golden Globes for TV are presented on Sunday night, January 6. According to our racetrack odds, the Hollywood Foreign Press Association will spread the wealth across multiple shows and networks. Scroll down to see our official forecasts listed by program. Do you agree with our picks?

“The Assassination of Gianni Versace” led the nominations with four bids, and we think it will win half of them: Best TV Movie/Limited Series and Best TV Movie/Limited Actor for Darren Criss. The FX limited series told the true story of spree killer Andrew Cunanan, who murdered the title fashion designer in 1997. This was the second season of the “American Crime Story” anthology series following “The People v. O.J. Simpson,” which also won the top prize from the Globes two years ago.

Three other programs are expected to be double winners. BBC America’s “Killing Eve” is also about the hunt for a murderer. It lost its two Emmy nominations in 2018, but it’s expected to win both of its Globe bids: Best Drama Series and Best TV Drama Actress for Sandra Oh, who also happens to be co-hosting the awards telecast with Andy Samberg.

SEEStephan James (‘Homecoming’) vs. Matthew Rhys (‘The Americans’) at the Golden Globes: Can the soldier beat the spy?

Amazon’s “The Marvelous Mrs. Maisel” is the only winner from last year’s Globes that we think will win again. In 2018 it claimed Best Comedy Series and Best TV Comedy Actress (Rachel Brosnahan), and we’re betting that it will repeat in both of those races.

Who else will win? And who might we be underestimating? Check out our predictions below. Make or update your own predictions here before the awards are handed out on Sunday night. And join the discussion on this and more with your fellow movie fans in our forums.