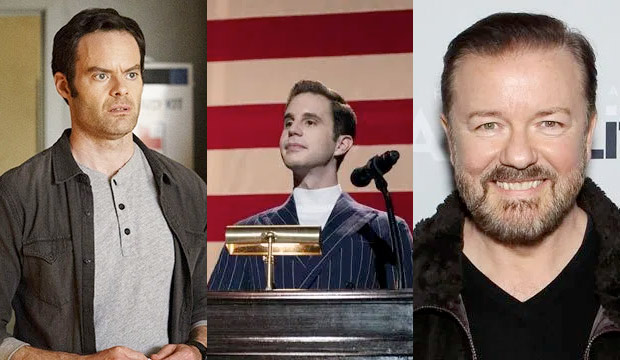 According to the predictions of Gold Derby’s editors, one of this year’s most head-scratching Golden Globes races will be Best TV Comedy Actor. Our 10 staffers who cover awards year-round are split over a trio of funny men, with five picking Bill Hader (“Barry”), four choosing Ben Platt (“The Politician”) and one going with Ricky Gervais (“After Life”). Of these three actors only Gervais has won a Golden Globe before, while Hader and Platt are still hoping to be anointed by the Hollywood Foreign Press Association.

SEE‘Fleabag’ dominated the comedy Emmys, but didn’t stop ‘The Marvelous Mrs. Maisel’ from making history of its own

The five editors who think Hader will take home his first career Golden Globe are: Chris Beachum, Joyce Eng, Zach Laws, Paul Sheehan and Susan Wloszczyna. Hader has won back-to-back Emmys for his role as the titular hired assassin on HBO’s comedy, but Globes voters last year went with Michael Douglas (“The Kominsky Method”) instead. Will they make it up to him this time around for “Barry’s” second season?

Finally, Rob Licuria goes rogue in predicting a victory for Gervais, who plays a widower on Netflix’s “After Life.” Gervais is a favorite of the HFPA, hosting their ceremony four times (2010-12, 2016) and winning two Golden Globes in 2004 for producing and starring in the UK version of “The Office.” This would be his fourth nomination in the comedy actor category after previously being recognized for “The Office” (2004), “Extras” (2008) and “Derek” (2015).

According to our editors’ 2020 Golden Globes predictions for Best TV Comedy Actor, this year’s five nominees will be Hader, Platt, Douglas, Ted Danson (“The Good Place”) and Gervais. Other potential nominees include Paul Rudd (“Living with Yourself”), Don Cheadle (“Black Monday”) and Bradley Whitford (“Perfect Harmony”). See more of our editors’ odds and rankings.

PREDICTthe Golden Globes now; change them until December 9
MAKE YOUR PREDICTION: Who will win Best TV Comedy Actor?
To save your prediction, you must log in to Gold Derby. Click here to sign in with existing account -- or create a new one.