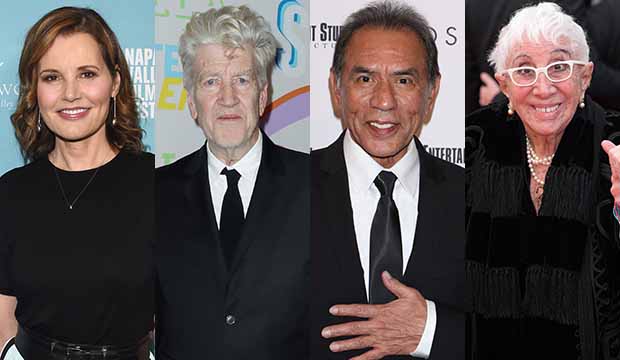 Honorary Oscars for 2019 will be presented this Sunday, October 27. That’s earlier than ever due to a much short Academy Awards season this year. Trophies will be presented at the Governors Awards in Hollywood to actress Geena Davis, director David Lynch, actor Wes Studi and director Lina Wertmuller. Members of the Academy board of governors chose and announced these four recipients back in the early summer.

Davis is receiving the Jean Hersholt Award for her humanitarian work. She won the Best Supporting Actress trophy for “The Accidental Tourist” (1988) and was also nominated for “Thelma and Louise” (1991). Other films in her career have included “The Fly,” “Beetlejuice,” “A League of Their Own” and “Speechless.”

Lynch has received three directing nominations in his career for “The Elephant Man” (1980), “Blue Velvet” (1986) and “Mulholland Drive” (2001). He was also nominated for Best Adapted Screenplay for “The Elephant Man.” Other films have included “Eraserhead,” “Dune,” “Wild at Heart,” “Lost Highway” and “The Straight Story.”

Studi becomes the first Native American performer to receive an acting Academy Award. His movies have included “Dances with Wolves,” “The Last of the Mohicans,” “Geronimo: An American Legend,” “Heat,” “The New World” and “Avatar.”

Wertmuller was the first woman ever to receive an Oscar nomination for directing. The film “Seven Beauties” (1976) also brought her a bid for Best Original Screenplay. Other films have included “The Basilisks,” “The Seduction of Mimi,” “Love and Anarchy” and “Swept Away.”

The selection process is very straightforward. Members of the board of governors put forth suggestions, with each of the top choices then voted on individually. Honorees must receive support from at least half of those on the board. The usual limit is three honorees. For a fourth to be named, he or she needs to garner two-thirds of the votes. Since the academy shifted these honorary kudos from the telecast to a separate non-televised ceremony 10 years ago, they have celebrated 39 people.

In 2010, honorary Oscars were bestowed on actor Eli Wallach, filmmaker Jean-Luc Godard and film historian Kevin Brownlow while Francis Ford Coppola was given the Thalberg.

In 2013, honorary Oscars went to actors Steve Martin and Angela Lansbury as well as costume designer Piero Tosi while actress/director Angelina Jolie was feted with the Hersholt.

In 2015, actress Gena Rowlands and director Spike Lee received honorary Oscars while Debbie Reynolds was feted with the Hersholt.