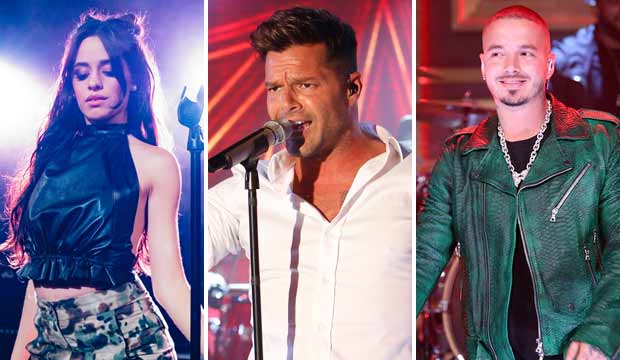 We already knew Camila Cabello was performing at the Grammy Awards on Sunday night, February 10, but now we know she’ll take the stage in what CBS and the recording academy say will be an “explosive show opener.” She’ll be joined by J Balvin, Young Thug, Ricky Martin and Arturo Sandoval.

Cuban-American singer Cabello got her start with the girl group Fifth Harmony before striking out on her own. She received her first pair of Grammy nominations this year: Best Pop Solo Performance for “Havana” and Best Pop Album for her solo debut “Camila.” Rapper Young Thug was featured on the chart-topping recorded version of “Havana” with Cabello, but Cabello is nominated by herself for a live version of the song.

Puerto Rican star Ricky Martin had a huge career breakthrough at the Grammys when he performed “La Copa de Vida” during the 1999 telecast. He has won twice at these awards over the course of his career: Best Latin Pop Performance for “Vuelve” (1999) and Best Latin Pop Album for “A Quien Quiera Escuchar” (2016). He also has three Latin Grammys, and some plaudits for acting too. His performance on Broadway in “Evita” earned him a Drama Desk nomination in 2012. And his role in “The Assassination of Gianni Versace” earned him an Emmy nomination in 2018.

Colombian singer J Balvin received his first Grammy nomination this year: he’s up for Record of the Year as a featured artist on Cardi B‘s number-one hit “I Like It.” But he’s already a three-time Latin Grammy winner, and recently had another crossover Latin hit with the song “Mi Gente” with Willy Williams and Beyonce, which peaked at number-three on the Billboard Hot 100.

SEEHello, Dolly! Country legend Dolly Parton will perform at the the Grammys along with Katy Perry, Little Big Town and more

Cuban-American jazz musician Sandoval is a music legend with four Grammy wins spanning almost 40 years. He was even the subject of the telefilm “For Love or Country: The Arturo Sandoval” story, which brought Andy Garcia an Emmy nomination for playing him, and won Sandoval himself an Emmy for composing the score.

Ew, David: Here's why it took 6 years for 'Schitt's Creek' to finally win some Emmys

2020 Emmys explained: Winners, upsets, records and what it all meant in an unprecedented year? [UPDATING…

Emmy flashback 50 years to 1970: 1st wins for 'Sesame Street' and a breakthrough for Black…

4 reasons why 'Euphoria's' Zendaya could pull off an Emmy upset

2020 Emmys: Start time, how to watch and who will win all 23 categories