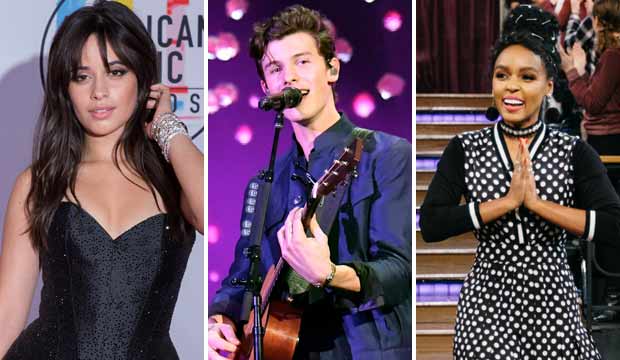 The recording academy has announced the first round of presenters who will take the stage at the 2019 Grammy Awards on Sunday night, February 10: Camila Cabello, Cardi B, Dan and Shay, Post Malone, Shawn Mendes, Janelle Monae and Kacey Musgraves. All of them are contenders to take home prizes this year, and most of them would be first-time winners.

Four of them are nominees for Album of the Year including Cardi B, who is up for her debut album “Invasion of Privacy.” That’s one of five nominations for the Bronx rapper, who could also be the first solo female artist to win Best Rap Album.

Post Malone competes for his sophomore release “Beerbongs and Bentleys,” and he’s also up for Record of the Year for the chart-topping “Rockstar.” He has a total of four nominations going into this event, and they’re the first nominations he has ever received from the recording academy — not a bad start for the hip-hop breakout.

Monae only has two nominations this year, but that includes the big one: her “Dirty Computer” is up for the top award. while her music video for “Pynk” also contends. Monae has now been nominated for eight Grammys over the course of her career, but she has yet to win.

Musgraves is up for Album of the Year for the first time for her critically hailed “Golden Hour” album. She could be the first country artist to win that prize since Taylor Swift prevailed for “Fearless” (2010). Musgraves also has a trio of nominations in the country field, where she has won twice before: her debut album “Same Trailer Different Park” won Best Country Album and Best Country Song (“Merry Go Round”) in 2014.

Cabello is a first-time nominee. She’s up for Best Pop Solo Performance for a live version of her ubiquitous hit “Havana,” and she’s also up for Best Pop Album for her solo debut “Camila.” She was previously a member of the girl group Fifth Harmony, but these are the first nominations of her career.

Also nominated for the first-time is Mendes, whose self-titled album contends for Best Pop Album and whose single “In My Blood” earned him a nom for Song of the Year. Though these are his first Grammy noms, the 20-year-old singer-songwriter has already released three albums.

Country duo Dan and Shay are also Grammy first-timers. They’re in the running for Best Country Duo/Group Performance for their double-platinum single “Tequila,” which could also win the race for Best Country Song.