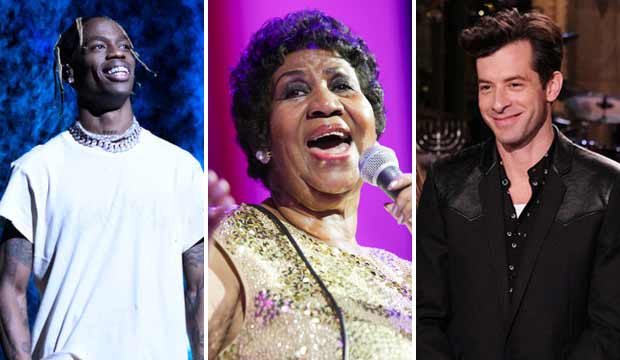 With the Grammys right around the corner on February 10, the recording academy and CBS have announced another round of performers for the main event: Chloe x Halle, Mark Ronson, Travis Scott, Dua Lipa, St. Vincent, Yolanda Adams, Fantasia and Andra Day.

Yolanda Adams, Fantasia and Andra Day will take the stage for a special performance in honor of Aretha Franklin, who died last August at age 76 after a career that spanned decades and earned the Queen of Soul a whopping 18 Grammys out of 44 nominations. Adams herself is a four-time Grammy winner for her gospel music, while Fantasia has won one Grammy out of 12 nominations in the R&B field. Day is a two-time Grammy nominee for R&B.

Like Dua Lipa, the sister duo Chloe x Halle are in the running for Best New Artist. They have an additional nom for Best Urban Contemporary Album for their debut studio album “The Kids Are Alright.” In addition to their music careers, they also co-star in the Freeform series “Grown-ish” opposite Yara Shahidi.

SEEIt’s official: Lady Gaga will perform at the 2019 Grammy Awards

Rapper Travis Scott received critical acclaim in 2018 for his chart-topping album “Astroworld,” which earned him a bid for Best Rap Album in addition to Best Rap Performance and Best Rap Song nominations for the number-one single “Sicko Mode.”

In all, Ronson has won five times, and this year he has three more chances to take home some hardware. He co-wrote “Shallow” with Lady Gaga, which earned him nominations for Song of the Year and Best Visual Media Song (Gaga was also announced as a performer at these awards). And he’s nominated alongside Dua Lipa for Best Dance Recording for the aforementioned “Electricity.”