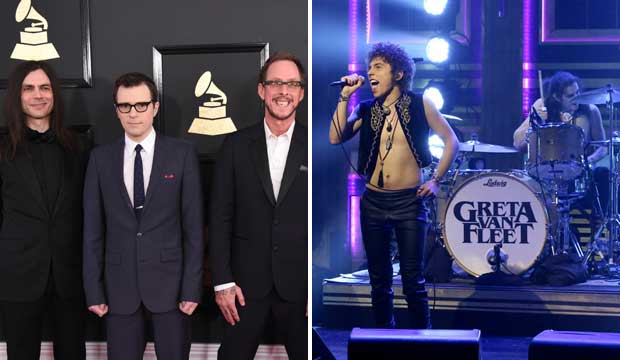 The rock band Weezer goes back a long way: they have released 12 albums over the last quarter century, but they have only been nominated for three Grammys, winning just once for their music video “Pork and Beans” (2009). Can they win Best Rock Album this year for “Pacific Daydream”? They face a tough challenge from the breakout band Greta Van Fleet, who contend for their EP “From the Fires.”

Weezer’s Best Rock Album nomination for “Daydream” is their only bid this year. Besides their victory for their music video, they were also nominated for Best Rock Album for their self-titled “White Album” in 2017. But that’s it. Despite the Grammys’ skimpy recognition of the group over the years, however, they lead our predictions with odds of 17/5, Those odds are based on the combined forecasts of thousands of Gold Derby users who have been making their picks since nominations were announced.

But Greta Van Fleet are close behind with odds of 71/20. How close is that? Well, our top users are split almost right down the middle. Our Top 24 Users, who got the highest scores predicting last year’s Grammys, give the slight edge to Weezer: 10 of them predict the Rivers Cuomo-fronted band, while 9 are betting on Van Fleet. But their positions are reversed when you ask our All-Star Top 24, who got the highest predictions scores when you combine the last two years’ Grammy results: 10 of them pick Van Fleet, while 9 pick Weezer.

Weezer has the benefit of experience and reputation, but Greta Van Fleet have the benefit of more overall support from the recording academy this year: they’re nominated four times, including Best New Artist, Best Rock Performance (“Highway Tune”) and Best Rock Song (“Black Smoke Rising”). Will that make all the difference?

Will 'Watchmen' break the Emmy record?

2020 Emmys online: How to watch the 72nd Emmy Awards live stream without a TV

2020 Emmy nominations list: The contenders in all 23 categories handed out on September 20