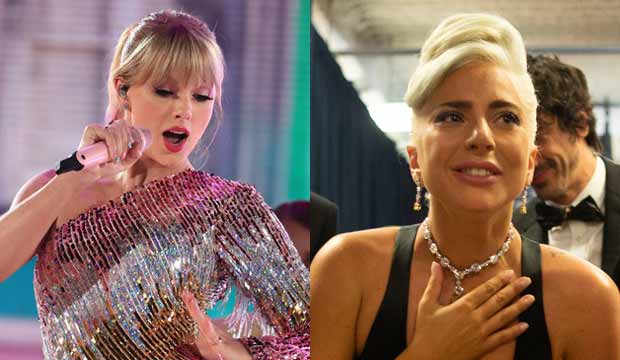 Who didn’t make the cut when the 2020 Grammy nominations were announced on Wednesday morning, November 20? Scroll down to see noteworthy names, songs and albums that missed out in the top four general field categories. And check out the list of nominations here.

Taylor Swift wasn’t completely absent from the general field as she was a couple of years ago when her “Reputation” was snubbed everywhere except Best Pop Album.  She did show up in Song of the Year for “Lover.” However, the album of the same name was left out of the race for Album of the Year, and “You Need to Calm Down” was missing from Record of the Year. “Calm Down” did pick up a Best Pop Solo Performance nom, though, and “Lover” is up for Best Pop Album.

Lady Gaga also had a mixed result, showing up in Song of the Year for “Always Remember Us This Way,” which she co-wrote for “A Star is Born,” but the “Star is Born” soundtrack itself was left out of the Album of the Year lineup. The collection, however, was nominated a couple times in visual media categories, including Best Visual Media Compilation.

Jonas Brothers were less lucky. Their first-ever number-one single, “Sucker” was nominated for Best Pop Duo/Group Performance, but that’s it. The song was nowhere to be found in the general field, and their reunion album “Happiness Begins” was also snubbed across the board.

Shawn Mendes also under-performed. Like the Jonas Brothers, he also picked up his only nomination in the Best Pop Duo/Group Performance race for “Senorita,” his duet with Camila Cabello. That chart-topper was absent from Record of the Year and Song of the Year even though Mendes earned a bid last year in the latter race for “In My Blood.”

SEEGrammy nominations list 2020: Who is nominated at the 62nd Annual Grammy Awards?

But that wasn’t as bad as the shutout suffered by Bruce Springsteen, whose critically acclaimed “Western Stars” album didn’t earn a single nomination, not in the general field and not in genre categories either. Over the course of his illustrious career Springsteen has won 20 times out of 50 nominations.

See who else missed out in the top four general field categories we were predicting here in our predictions center.

NOT RECORD OF THE YEAR
“Always Remember Us This Way,” Lady Gaga
“Senorita,” Shawn Mendes and Camila Cabello
“Someone You Loved,” Lewis Capaldi
“Spirit,” Beyonce
“Sucker,” Jonas Brothers
“This Land,” Gary Clark Jr.
“Without Me,” Halsey
“You Need to Calm Down,” Taylor Swift