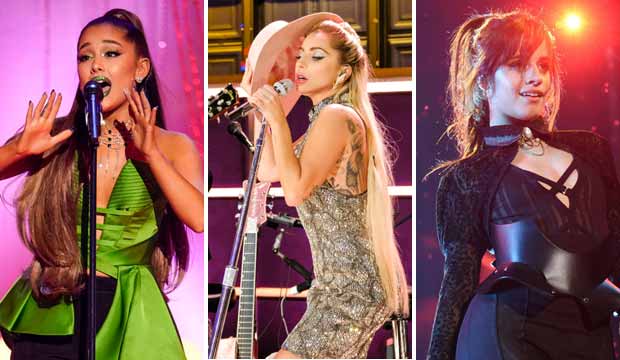 The race for Best Pop Solo Performance at the Grammys may be wide open since none of the nominees in the category are up for Record of the Year or Song of the Year. But even when there is a general field nominee in the running there have often been upsets, so we may not be able to rule anyone out of this contest.

Ariana Grande is nominated for “God is a Woman.” It was a top-10 hit, and Grande is a powerhouse female vocalist; that has been a winning formula for Adele, who has won this category three times, more than anyone else since men and women were merged into one solo performance category in 2012.

But Adele usually dominated the general field categories too, while Grande was snubbed in the top races, so she’ll try to follow Ed Sheeran‘s path instead. Sheeran was surprisingly left out of the top categories last year, but he was arguably the biggest hit-maker of 2017 so he ended up winning Pop Solo (“Shape of You”) and Pop Album (“Divide”) anyway. Those are the same awards Grande is up for this year.

However, Lady Gaga looms large. She’s nominated in this category for “Joanne (Where Do You Think You’re Goin’?).” That song isn’t nominated for Record or Song of the Year, but Gaga does compete in those categories for another single, “Shallow” with her “A Star is Born” co-star Bradley Cooper. It’s possible the enthusiasm for that song and Oscar buzz for her performance in the movie will spill over here. But it’s also possible that Grammy voters will feel they have plenty of opportunities to reward her for “Shallow” and look elsewhere in this category.

They could look towards Camila Cabello, who is nominated for this category’s biggest hit, “Havana.” But the official single featuring Young Thug that topped the charts was actually submitted for Grammy consideration last year, so for this contest she had to submit a live version. That could hurt her chances if voters feel like they’re not voting for the version of this song everyone is most familiar with. Or it could help her like it did for Pharrell Williams in 2015.

Williams submitted a live version of his inescapable hit “Happy” that year, and voters were so eager for the chance to vote for that song they awarded him over three nominees for Record of the Year: “Chandelier” by Sia, “Stay with Me” by Sam Smith and “Shake it Off” by Taylor Swift. So having missed their chance to award “Havana” before, the recording academy might jump at the chance this year.

Or they could go with an option that seems unlikely on paper: “Better Now” by hip-hop artist Post Malone. His music straddles genres between pop and rap, which would make him an unusual winner in this category, but “Better Now” is actually the biggest hit in this category when you consider that the live version of Cabello’s “Havana” wasn’t the one that topped the charts. It peaked at number-three on the Billboard Hot 100, and we know Grammy voters like Post Malone this year since he’s nominated for Album of the Year for “Beerbongs and Bentleys.”

But Grammy voters didn’t even nominated “Beerbongs” for Best Pop Album, which sends a mixed message about how much they like him this year. Meanwhile, Beck will try to achieve another awards ambush with the title song from his latest album “Colors.” He famously upset Beyonce‘s self-titled album for Album of the Year in 2015, and he has three nominations this year including Best Alternative Album, so one should never count him out.

That’s five nominees, and you could make a plausible case for all five winning. Do you think “God” will be on Grande’s side?