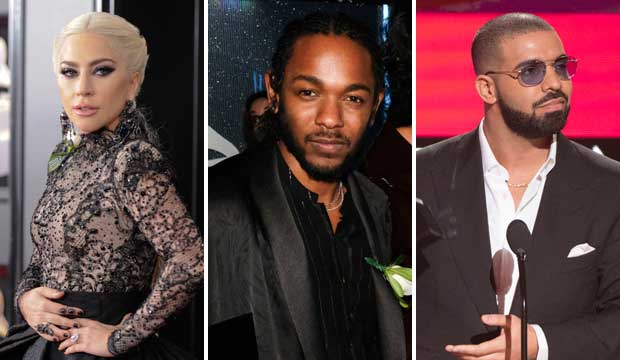 Norah Jones did it in 2003. U2 did it in 2006. Adele did it in 2012 and 2017. Bruno Mars just did it in 2018. But it seems like it should be very hard to do. I’m talking about achieving a clean sweep at the Grammys. And I don’t mean just going two-for-two or three-for-three. For an artist to be nominated in five or more categories and take every single one of them seems unlikely given how competitive the Grammys usually are and how mercurial the voters tend to be, but when the recording academy loves you they don’t hold back. Who has the best chance for a clean sweep this year? Scroll down to vote in our poll at the bottom of this post.

Of the artists nominated for five or more awards this year I think Lady Gaga probably has the best chance. As of this writing she’s the front-runner to win Record of the Year and Song of the Year for “Shallow,” according to the combined predictions of over 1,000 Gold Derby users. That song is an even heavier favorite in two other categories: Best Pop Duo/Group Performance and Best Visual Media Song.

Her toughest race may be Best Pop Solo Performance, where she’s nominated for “Joanne,” the title track from her last album. “Joanne” wasn’t greeted with nearly as much enthusiasm as Lady Gaga’s “A Star is Born” music has been, but that might not matter. None of the other Pop Solo nominees had widespread support from the recording academy, so is voters go gaga for Gaga elsewhere, that enthusiasm could certainly spill over in this category.

Kendrick Lamar also has a chance to sweep. He has eight nominations this year across seven categories, more than any other artist, and he’s used to achieving clean sweeps in the rap field, but the more nominations you have, the harder it is to win every single one of them. And even if he sweeps the rap categories again, a clean sweep would require him to claim Album of the Year (“Black Panther” soundtrack), plus Record of the Year and Song of the Year (“All the Stars”), categories that have been notoriously inhospitable to hip-hop music.

SEEWill Childish Gambino (‘This is America’) be redeemed by the Grammys after losing Video of the Year at the VMAs?

Drake faces the same problem. He has seven bids across five categories and would not only have to win all three of his general field nominations (Album for “Scorpion,” Record and Song for “God’s Plan”), he’d also have to beat the usually dominant Lamar in rap races. Ditto five-time nominee Cardi B, who is up for Record (“I Like It”) and Album (“Invasion of Privacy”) in addition to noms in pop and rap categories.

Maybe there are artists we’re underestimating for wins the same way we underestimated them for nominations. R&B newcomer H.E.R. (five nominees) and Americana fave Brandi Carlile (six nominations) exceeded our expectations; they may have their genre fields on lock this year, so maybe they can sweep the general field while they’re at it. H.E.R. is up for Album (“H.E.R.”) and Best New Artist, while Carlile contends for Album (“By the Way, I Forgive You”), plus Record and Song (“The Joke”).

SEELady Gaga, get thee to the Grammys! Our readers say she should skip the BAFTAs on February 10

Perhaps no one will run the board at the Grammys — that’s usually the case. But vote below to let us know who you think has the best chance.