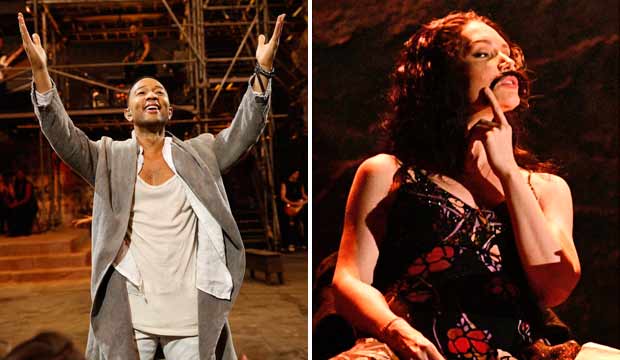 As of this writing “Jesus Christ Superstar” is predicted to win this year’s Grammy Award for Best Musical Theater Album with 82/25 odds. It’s a live recording of NBC’s Emmy-winning telecast, unlike the other nominees (“The Band’s Visit,” “Carousel,” “My Fair Lady” and “Once on This Island”), which are studio recordings of traditional stage productions. Could that help or hurt “Superstar”?

This isn’t the show’s first time at the Grammys. The original concept album was nominated for Album of the Year back in 1972, but lost to Carole King for her second studio album, “Tapestry.” The very next year the Broadway cast recording was nominated for Album of the Year, but it lost too; Grammy voters picked “The Concert for Bangladesh” by George Harrison and Friends instead. So the iconic rock opera has a major Grammy IOU, especially considering how its creators — composer Andrew Lloyd Webber and lyricist Tim Rice — went on to win multiple Grammys themselves.

This version of “Jesus Christ Superstar” could also be helped by the fact that some of the principal soloists credited on the album include previous Grammy nominees. Sara Bareilles has been nominated six times before, but still has yet to win. Alice Cooper has been nominated twice before. Brandon Victor Dixon was previously nominated as a principal soloist in 2014 on the original cast recording of “Motown: The Musical.” And Norm Lewis was previously nominated as a principal soloist on the 2012 cast recording of “Porgy and Bess.” Then of course there’s 10-time Grammy winner and recent EGOT recipient, John Legend, who is the lead vocalist. And the album also happens to be produced by six-time Grammy nominee Harvey Mason, Jr.

But the other four nominated albums still have a shot of winning thanks to some Grammy-friendly talent involved. Currently in second place with 18/5 odds is the reigning Tony champ for Best Musical, “The Band’s Visit.” Credited as producers on the album are Dean Sharenow (who was previously nominated in 2007 for “The Phat Pack”) and Tony-winning composer/lyricist, David Yazbek. Six times in the past 10 years this category went to a show that won the Tony for Best Musical (“In the Heights,” 2009; “The Book of Mormon,” 2012; “Once,” 2013; “Kinky Boots,” 2014; “Hamilton,” 2016; and “Dear Evan Hansen,” 2018). And Yazbek has been Grammy nominated twice before without a win. He was nominated in 2002 for “The Full Monty” (which lost to “The Producers”) and in 2006 for “Dirty Rotten Scoundrels” (which lost to “Monty Python’s Spamalot”).

The other three Grammy nominees are tied with 9/2 odds, including the reigning Tony champ for Best Musical Revival, “Once on This Island.” This is the very first recording of the 1990 cult musical to earn a Grammy nomination, though the songwriting team of Lynn Ahrens and Stephen Flaherty (who are both credited as producers on the album) have been nominated twice before. They contended in 1998 for the concept album of “Ragtime” (which lost to the revival recording of “Chicago”) and in 2002 for “Seussical” (which lost to “The Producers”).

Also credited as a producer on “Island” is eight-time Grammy winner Elliot Scheiner, who has won prizes for engineering and mixing albums ranging from Steely Dan‘s “Two Against Nature” to Beyonce‘s “Lemonade.” But so far within this past decade only one Tony winner for Best Musical Revival has gone on to prevail at the Grammys: “The Color Purple” in 2017.

Then there’s Lincoln Center Theater’s award-winning revival of “My Fair Lady.” Recordings of this classic musical have been nominated twice before in this category, but the show has never won. It was first nominated in 1977, but lost to “Bubbling Brown Sugar.” Then it was nominated in 1988, but lost to the original Broadway cast recording of “Les Miserables.” Grammy voters may want to finally award this iconic musical by Alan Jay Lerner and Frederick Loewe. However, in the last 10 years only one show that lost the Tony for Best Musical Revival has prevailed at the Grammys: “West Side Story” in 2010.

Interestingly, that “West Side Story” album was produced by David Lai, who just so happens to be nominated for this year’s “My Fair Lady.” Also credited as producers on the album are Van Dean (a previous winner for the aforementioned cast recording of “The Color Purple”) and Ted Sperling (who has been nominated four times before, but has yet to win).

Rounding out the category is “Carousel.” This classic has only been nominated once before: back in 1995, when it lost to Stephen Sondheim‘s “Passion.” While the most recent Broadway revival received mixed reviews from critics, the production did receive raves for the vocal performances of this beloved score by Richard Rodgers and Oscar Hammerstein II.

In fact, two of the credited principal soloists on this “Carousel” recording are previous Grammy winners: Renee Fleming (who has won four times before as a classical vocalist) and Jessie Mueller (who previously won in 2015 as the principal soloist for “Beautiful”). The producer of the album is 15-time Grammy winner Steven Epstein, who has won Producer of the Year (Classical) a whopping seven times and also won this category for the “Once” cast recording in 2013.

That’s a lot of  star power and Grammy pedigree for one category. So will voters praise “Jesus,” join the “Band,” or honor an overdue Broadway classic?