Breaking down the precursor awards — both nominations and winners — as well as the top Oscar nominations by categories gave us 35 key races that highlighted the strongest films at the Academy Awards. To be a leading Oscar contender, a film needs to be represented across a range of races. This theory is not completely fool-proof.

While it took four years before it forecast the Best Picture winner, this analysis has always done a good job of telling the tale of awards season and clarifying which film(s) are getting the most consistent support across the board throughout their campaigns. And that’s the key – consistency and across the board support. “Black Panther” was never going to win Best Picture – it had support from SAG, yes, but it didn’t have the consistency of earning Best Picture nominations across most of the precursors – nor did it manage to earn any other solo acting bids apart from Michael B. Jordan’s Supporting Actor nod at the Critics’ Choice awards.

My theory measures victories as well as nominations, too, which is where “A Star is Born” faltered. Bradley Cooper‘s film got almost all the nominations it needed but registered only a couple of victories. Even just a few more victories and it would’ve topped this year’s 35 boxes theory. (An eagle-eyed reader correctly picked up that I had mistakenly given “A Star is Born” a Best Editing Oscar nominations, so that’s been rectified here – the film has 17 boxes ticked instead of 18.)

SEE As Gold Derby predicted, every Best Picture nominee won at least one Oscar (but not always the ones we thought)

But, for the first time since I created this theory four years ago, the winner of this year’s 35 boxes theory was also the winner of Best Picture: “Green Book.” Peter Farrelly‘s film earned a total of 23 boxes ticked after all of the precursor awards had had their say – three more than second-placed “BlacKkKlansman” and “The Favourite” – and managed to best the predicted Best Picture winner “Roma” come Oscar night. Here’s the full story: 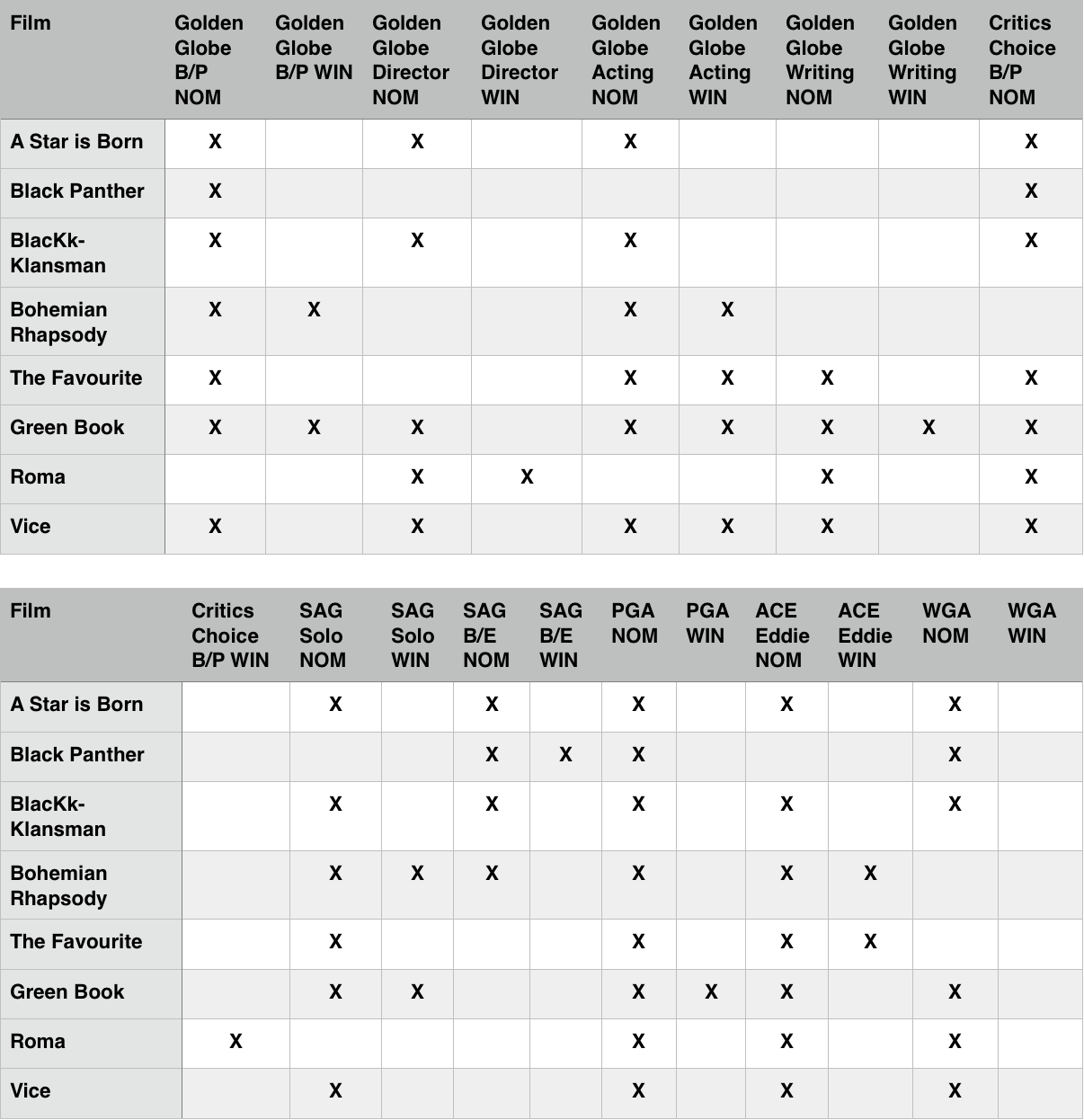 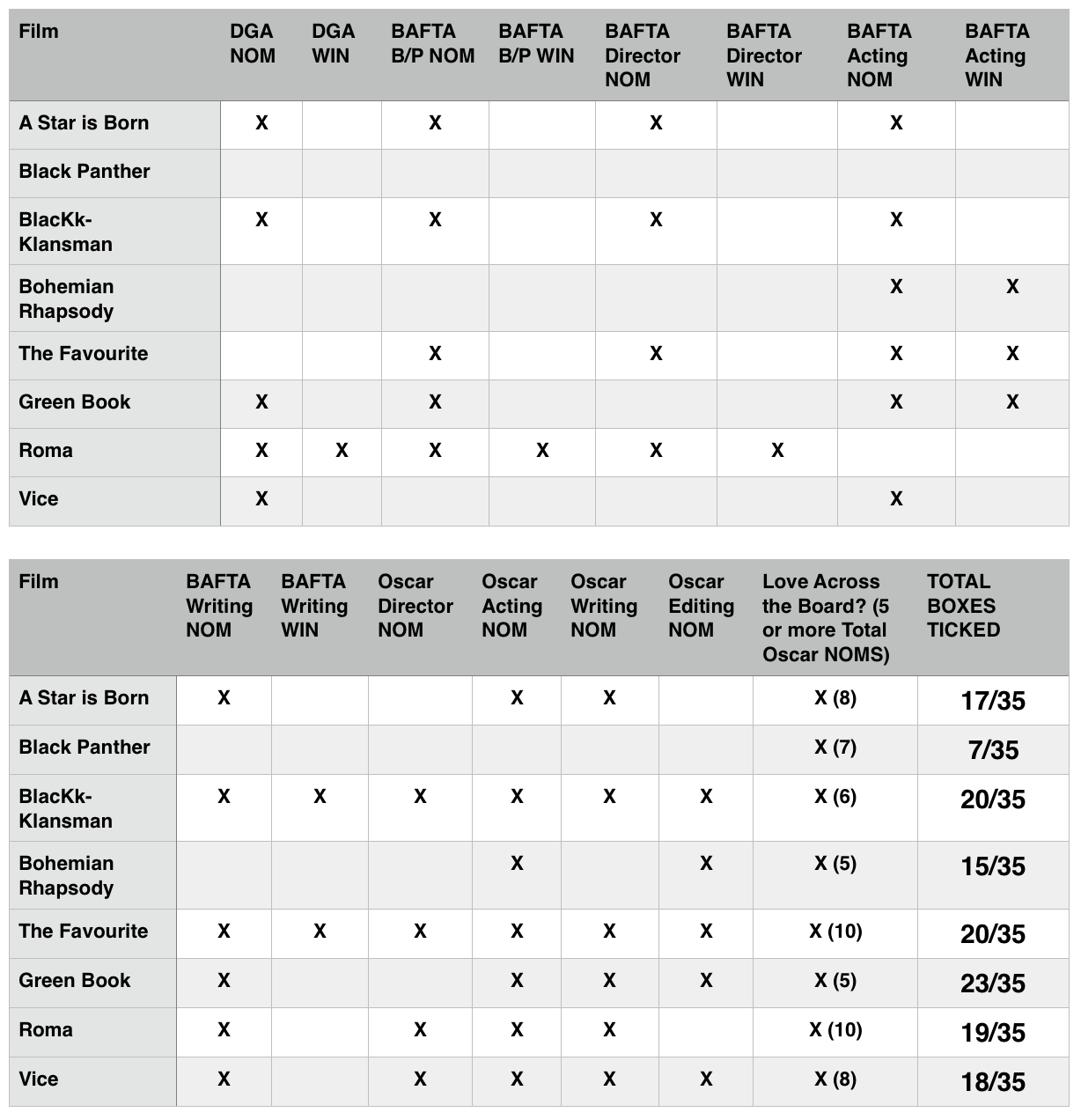 While “BlacKkKlansman” and “The Favourite” were the only two films to pick up all five Oscar boxes (reflected in the fact that both are joint second), it was “Green Book” that came out on top. It earned nominations at every awards group included in this theory and its acting strength was key – Mahershala Ali ensured the film ticked off both the acting nominations and acting wins boxes everywhere.

No other film had that amount of consistency in the acting boxes, apart from “The Favourite.” However, the style of “The Favourite” made it divisive, meaning it rarely turned any of its major nominations for picture, director, acting and even writing, into wins. It lost at the Globes in three races, the BAFTAs in two races, and missed out at PGA, DGA, Critics’ Choice, and SAG. It also missed the WGAs completely. “Roma,” meanwhile didn’t tick off any acting or writing boxes whatsoever. Its lack of acting nominations (apart from at the Oscars) was ultimately what made it lose to “Green Book” in this theory.

So, there you have it. For the first time since I started this theory, my theory has been proving correct. It’s about time. For the record, though, here’s the full results of the last four years:

Clearly, this theory needs some fine-tuning. One in four isn’t a stellar record. But, still, each of the last four Best Picture winners have been in the top three of each 35 boxes theory. And the films that bested the eventual Best Picture winner were either clear favourites or ran them very, very close. It was a complete three-horse race in 2016, with “The Revenant” slightly tipped to win, but with so little between each of them, it could have been any of them. Third placed “Spotlight” ended up winning, though it was only two behind the theory winner “The Revenant.”

In 2017, absolutely everyone assumed “La La Land” was going to win Best Picture – with the film earning a whopping 31 out of 35 possible boxes ticked. Somehow, “Moonlight” won – but that movie was in second place in my theory with 23. In 2018, meanwhile, it was another close race. “Three Billboards” earned the most boxes ticked, but “The Shape of Water” won Best Picture. However, Guillermo del Toro‘s film was only two behind.