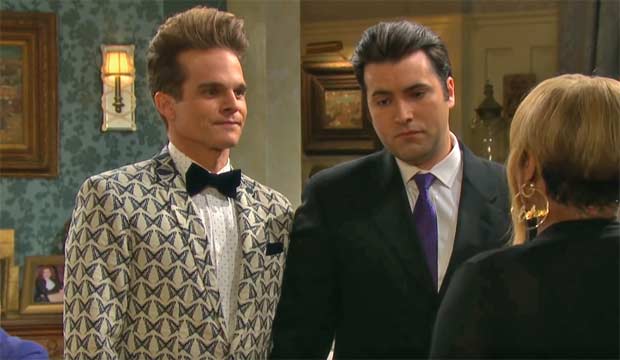 Greg Rikaart is best known for his Daytime Emmy-winning role as Kevin Fisher on “The Young and the Restless,” but in 2018 he took a detour to “Days of Our Lives,” where he played con artist Leo Stark for a year. The television academy clearly liked that performance too since they gave Rikaart his seventh career nomination for it. Now if he wins Best Supporting Actor he’ll be the first to take this category for playing a gay role. And he’d be the first openly gay soap actor to win any category for a gay role.

But whether he wins depends on what the blue ribbon panel thought of his reel. These awards are unique in that they are decided by judges voting on sample performance reels from each actor. Read on for our complete scoop on Rikaart’s submission.

Synopsis: The reel begins with Leo back from the dead to taunt Will (Chandler Massey) and Sonny (Freddie Smith). Will and Sonny thought they had accidentally killed Leo during a previous altercation, after which they dumped his body to cover up the crime. But Leo tells them that he has actually been back in Salem for a while, watching them from afar, and now he demands that Sonny marry him or else he’ll tell all about the attempted murder.

The next scene is the wedding between Sonny and Leo, with Sonny’s family watching the nuptials in horror. After the uncomfortable ceremony is over, the reel ends with Leo on his way to get a bottle of wine to celebrate, teasing a mortified Sonny and his family about getting ready for their wedding night.

Pros: Rikaart is the only nominee in this category who submitted an outright villainous performance, so he might stand out from the competition, following in the footsteps of other wicked winners in recent years like Eileen Davidson (“Days”) and Chloe Lanier (“General Hospital”). And he gets an impactful moment as he delivers his mock testimony to Will and Sonny about how they heartlessly dumped his body.

Cons: Because Leo is such a cold, calculating fiend, Rikaart doesn’t get to express as much emotion as his rival nominees, and much of the dialogue in the reel is driven more by plot and exposition than it is by character.