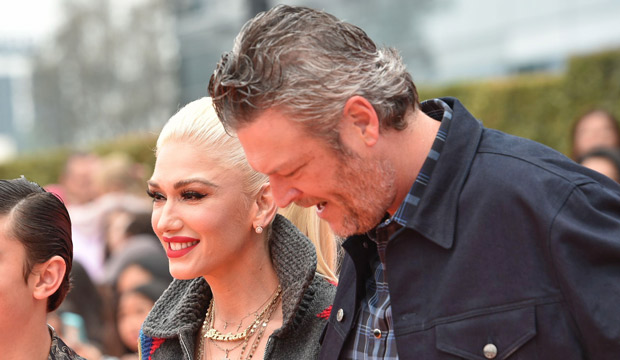 During Monday’s episode of “The Voice” Season 17, Gwen Stefani threw shade at her boyfriend (and rival coach) Blake Shelton on national television. “I was nervous [to come back],” she told host Carson Daly after being away from the show for five seasons. “I didn’t know what it was gonna be like with Blake, because I knew I wanted to beat him so bad, and I am probably going to beat him. So I feel fired up.”

The couple became friends thanks to “The Voice” when she first joined up as a coach in Season 7, then they started officially dating in 2015 after both of their individual divorces were finalized. “To be super honest, it is kind of crazy we both went through the same thing at the same time,” Gwen stated at the time.

Gwen wasn’t originally supposed to be a coach on Season 17 of NBC’s reality TV show. However, after Adam Levine shockingly quit, telling his fans “it was time to move on,” she quickly stepped in to fill the empty seat. This marks Gwen’s fourth season as a coach and Blake’s 17th — that’s right, he’s never missed a beat. They are joined by Kelly Clarkson (her third season) and John Legend (his second season).

The competitive spirit is definitely alive and well this year, particularly when it comes to Blake and Gwen, aka “America’s favorite couple,” as John referred to them. “I feel like I’m a better coach than these other three,” Blake proclaimed during Monday’s blind auditions. “I love all of them — one of them a lot. But this is a competition and I’m here to win.”

Blake has won six seasons of “The Voice” (see the winners list) while Gwen has yet to prevail. Might Season 17 be the year Gwen has been waiting for to finally win the competition? Give us your thoughts below.