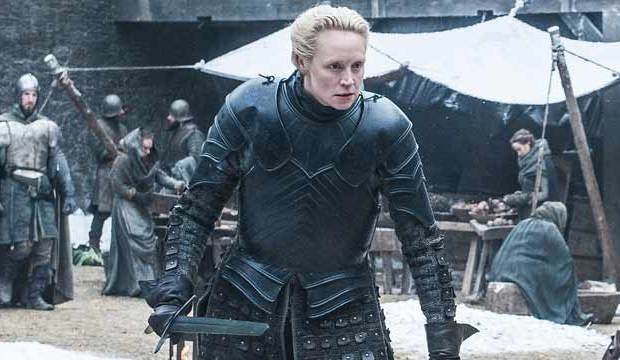 Best Drama Supporting Actress at the 2019 Emmys could be the ground for a “Game of Thrones” battle with four of its scene-stealers fighting for the throne: Lena Headey, Sophie Turner, Maisie Williams and Gwendoline Christie. Should Christie be nominated for this final season, she’d receive her first career Emmy bid for playing Brienne of Tarth on the HBO behemoth. (Watch our exclusive video interview with Christie.) Below, see my three reasons why I believe she has a fighting chance to be knighted by the Emmys.

With its 47 wins, making it the most rewarded scripted series in Emmy history, “Thrones” has proven to be a TV academy darling. After not only sitting out the 2017 Emmys but then releasing its seventh season an entire year before the 2018 ceremony, it was still able to nab 22 nominations and nine important wins, including for Best Drama Series and Best Drama Supporting Actor for Peter Dinklage.

Now, having concluded its eighth and final season in mid-May, the show was fresh in mind when voters marked off their nominating ballots from June 10-24. Despite mixed reviews, “GoT” could benefit from the final season glow and get a goodbye hug from voters; even if they aren’t necessarily voting for Season 8’s quality, they might just want to pay their respects for the show’s overall achievement.

With “Game of Thrones” predicted to make yet another dent in the nominations, Christie could just ride its coattails to a bid. After all, it’s the last but also only time to reward her for playing this fan-favorite character and for being uniformly excellent at doing so throughout the show’s run. A farewell nom would be a great way to send off this character and Christie’s accumulative work.

While “Thrones” could take up four of the six slots in this category, it’s worth noting that Headey is the only possible returnee from last year’s lineup, with “The Crown,” “The Handmaid’s Tale,” “Stranger Things” and “Westworld” sitting out this cycle. That technically leaves five slots open, assuming Headey is indeed a safe bet to return.

In our combined Emmy odds, Headey is currently in second place, Williams in third, and Turner in fifth, while Christie sits outside the top six in ninth place. That said, not only is she still in striking distance, she could easily still shoot up in our odds before the noms are announced on July 16.

The other three actresses currently in the top six are predicted front-runner Julia Garner for “Ozark,” Rhea Seehorn for “Better Call Saul” in fourth and Susan Kelechi Watson for “This Is Us” in sixth. But all three have something in common with Christie, as does Turner, which is that they’re aiming to snatch their first Emmy nom for a character they’ve already been playing for several seasons.

SEEEmmy Experts say ‘Game of Thrones’ will win Supporting Actress, but here’s why Julia Garner (‘Ozark’) is the front-runner anyway

Brienne didn’t make her entrance until the second season of “Thrones,” and ever since, she’s been honorable and loyal, strong and resilient, and has never let her guard down, even after moments of failure. Her storyline comes full circle when in “The Knight of the Seven Kingdoms” she’s knighted by Jaime (Nikolaj Coster-Waldau), something she had deemed impossible as the title was mostly reserved for men. As the title already alludes to, her storyline takes center stage in this episode, and Christie gives a moving, heartfelt performance in a scene that viewers had long anticipated.

But that isn’t the only episode that showcased her talent: in the fourth episode, “The Last of the Starks,” following the defeat of the Night King and his Army of the Dead, Jaime and Brienne become lovers. That is before he leaves her at the end of the episode to return to his sister and former lover Cersei (Headey) as a Kings Landing attack is on the horizon. Christie delivers throughout, but it’s the scene where Brienne breaks down and begs Jaime to stay that truly stands out.

We also get a few final moments with Brienne in the series finale, “The Iron Throne.” She becomes part of the Small Counsel as Commander of the Kingsguard and completes Jaime’s entry in the White Book, as he falls victim to Daenerys’ (Emilia Clarke) ruthless destruction of Kings Landing.

While we’d seen moments of vulnerability throughout, never before had we seen Brienne this broken. The change of pace in her storyline gave Christie great material to sink her teeth into and an opportunity to display her emotional range. Although voters often gravitate towards loud, showy performances in this category (like Maggie Smith as sassy Violet Crawley on “Downton Abbey” or Ann Dowd as mustache-twirling villain Aunt Lydia on “Handmaid’s”), Christie’s emotional turn could be just as much of an eye-catcher.