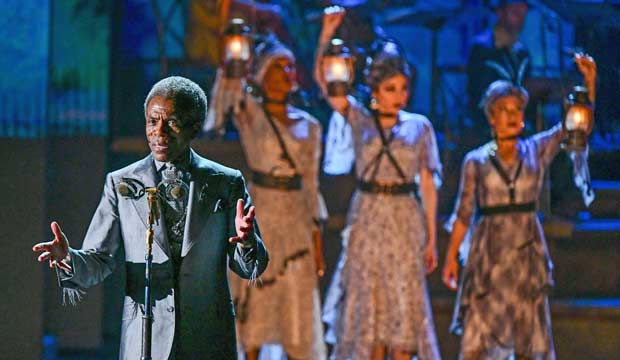 This year’s Grammy nominees for Best Musical Theater Album are “Ain’t Too Proud,” “Hadestown,” “Moulin Rouge!,” “The Music of Harry Potter and the Cursed Child — In Four Contemporary Suites” and “Oklahoma!” Six of the last 10 winners in this category matched up with the Tony Award for Best Musical. So does this bode well for the 2019 Tonys champ, “Hadestown”?

In the musical, songwriter Orpheus and his muse Eurydice fall in love during the warmth of summertime. But as winter approaches, reality sets in: these young dreamers can’t survive on songs alone. Tempted by the promise of plenty, Eurydice is lured to the depths of industrial Hadestown. On a quest to save her, Orpheus journeys to the underworld where their trust is put to a final test.

The nominated principal soloists on the recording are Reeve Carney, André De Shields, Amber Gray, Eva Noblezada and Patrick Page. Credited as producers on the album are Mara Isaacs, David Lai, Tony-winning songwriter Anaïs Mitchell and Tony-winning orchestrator Todd Sickafoose. Lai is a previous winner in this category for the 2009 cast recording of “West Side Story.” Meanwhile, Mitchell was actually nominated for Best Recording Package in 2010 for her “Hadestown” concept album.

Six times in the past 10 years the Grammy winner in this category had won the Tony for Best Musical — or would go on to win the Tony for Best Musical, depending on which side of the eligibility period the cast recording landed on. Grammy champs “The Book of Mormon” (2012), “Once” (2013), “Kinky Boots” (2014), “Hamilton” (2016), “Dear Evan Hansen” (2018) and “The Band’s Visit” (2019) were all Tony winners, which is good news for “Hadestown.” Even better, “Hadestown” stands out since it’s the only nominee consisting of a completely original song score.

SEEGrammy nominations list 2020: Who is nominated at the 62nd Annual Grammy Awards in all 84 categories?

Fellow nominee “Oklahoma!” may be a threat. It won the Tony for Best Musical Revival, which made it the very first Broadway production of the classic Rodgers and Hammerstein musical to win a top honor from the American Theatre Wing. When it comes to the Grammys, though, only one prior recording of “Oklahoma!” ever received a nomination, which was back in 1981 when it lost to “Evita.” So the show that revolutionized musical theater is still waiting to cash in its I.O.U. with the recording academy.

The “Oklahoma!” principal soloists are Damon Daunno, Rebecca Naomi Jones, Ali Stroker, Mary Testa and Patrick Vaill. Credited as producers are Tony-nominated orchestrator Daniel Kluger and Dean Sharenow. Kluger was able to reconceive the original orchestrations to fit a small seven-piece band, even creating a more country/bluegrass sound for the beloved score. And Sharenow happens to be one of the producers behind last year’s Grammy winner, “The Band’s Visit.” However, only one Tony winner for Best Musical Revival so far this decade has prevailed at the Grammys: “The Color Purple” (2017).

Meanwhile, jukebox musicals have a pretty good track record in this category given that they utilize song catalogs that music industry pros are already familiar with. After all, “Beautiful: The Carole King Musical” did manage to pull off an upset over the presumed front-runner “Hedwig and the Angry Inch” back in 2015. And this year there are two jukebox musicals in contention.

“Ain’t Too Proud” features the songs of Motown, mainly The Temptations, a music group that won three Grammys over the course of their career. They were actually the first Motown act to win a Grammy Award when they claimed Best R&B Duo/Group Performance for “Cloud Nine” in 1969. The “Ain’t Too Proud” nominated performances are Saint Aubyn, Derrick Baskin, James Harkness, Jawan M. Jackson, Jeremy Pope and Ephraim Sykes.

The other jukebox musical nominated is “Moulin Rouge!,” a stage adaptation of Baz Luhrmann’s 2001 movie musical of the same name. The original film did receive a Grammy nomination for Best Visual Media Compilation in 2002, but it lost to “O Brother, Where Art Thou?,” which happened to be one of only three soundtracks ever to win Album of the Year. Like the “Moulin” movie, the stage musical features a wide variety of songs from established artists ranging from Madonna to Nirvana. And its Grammy-nominated soloists are Danny Burstein, Tam Mutu, Sahr Ngaujah, Karen Olivo and Aaron Tveit.

The last nominee in the category this year, “Harry Potter And The Cursed Child,” was a surprise inclusion over high-profile contenders like “The Cher Show,” “Kiss Me, Kate,” “The Prom” and “Tootsie.” Though given that the album’s composer/producer Imogen Heap was already a two-time Grammy winner herself, we probably should have seen it coming.

Heap’s first win was Best Engineered Album, Non-Classical for her studio album “Ellipse” back in 2010. Her second victory was Album of the Year in 2016 as a producer and engineer on Taylor Swift’s “1989.” However, “Harry Potter and the Cursed Child” only features incidental music from a stage play, unlike the full song scores of the other nominees, so it might not be showy enough to win this award despite Heap’s impressive resume.

So will “Hadestown” continue the success of the Tonys-to-Grammys pipeline, or will the recording academy leave it in the underworld?