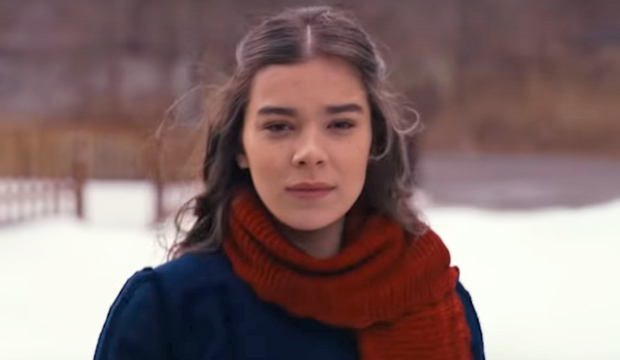 Emily Dickinson‘s most famous poem (“Because I could not stop for Death – He kindly stopped for me”) is front and center in Apple’s gothic comedy series “Dickinson.” Actress and singer/songwriter Hailee Steinfeld portrays the title character in this coming-of-age dramedy set in the 1800s, though with a modern sensibility. Throughout the 10-episode first season, which debuted November 1 on Apple TV+, Emily deals with her sexuality, her burgeoning career and her curious fascination with death. With Steinfeld’s star on the rise, will awards voters “kindly stop” for her on their way to filling out their ballots?

Steinfeld is no stranger to awards, earning an Oscar nomination for “True Grit” (2010) and a Golden Globe bid for “The Edge of Seventeen” (2016). In addition, she took home the Critics’ Choice Award for “True Grit” as Best Young Actor/Actress when she was only 14.

The now 22-year-old perfectly fits the mold of your typical Golden Globe winner, as the voters can’t stop themselves from rewarding the most famous faces on the hottest new shows. Think recent winners like Rachel Brosnahan (“The Marvelous Mrs. Maisel”), Rachel Bloom (“Crazy Ex-Girlfriend”), Gina Rodriguez (“Jane the Virgin”) and Lena Dunham (“Girls”).

Members of the Hollywood Foreign Press Association also love it when pop stars show off their acting chops. They rewarded Madonna for “Evita” (1996) and Lady Gaga for “American Horror Story” (2015), then nominated Lady Gaga again last year for acting in “A Star Is Born” (ultimately giving her the prize for co-writing the song “Shallow”). Might Steinfeld be next?

Music plays a big part in “Dickinson,” with Steinfeld even writing a song specifically for the show, to be released on Apple Music. Even though “Dickinson” takes place more than a century ago, showrunner Alena Smith fills it with a modern-day tone including current songs and dance moves. Yes, there’s twerking.

SEEThe trailer for Apple’s ‘The Morning Show’ is here, and this show is coming for all the Emmys [WATCH]

For “Dickinson” Steinfeld is pulling double duty as the star and executive producer, so she could end up with bookend trophies should she win Best TV Comedy Actress and Best Comedy Series. Several of her potential co-nominees also fit that billing, including Phoebe Waller-Bridge (“Fleabag”), Kirsten Dunst (“On Becoming a God in Central Florida”), Natasha Lyonne (“Russian Doll”) and Julia Louis-Dreyfus (“Veep”).

As of this writing two of Gold Derby’s editors predict Steinfeld will win the lead acting race: myself and Rob Licuria. “Oscar nominee ‘it girl,’ all-round performer in a hot fun new Apple show? Yeah, Hailee Steinfeld is EXACTLY the kind of nomination the HFPA would go for when spreading the wealth among networks and platforms,” Licuria explains about his prediction. See more 2020 Golden Globes odds and rankings.