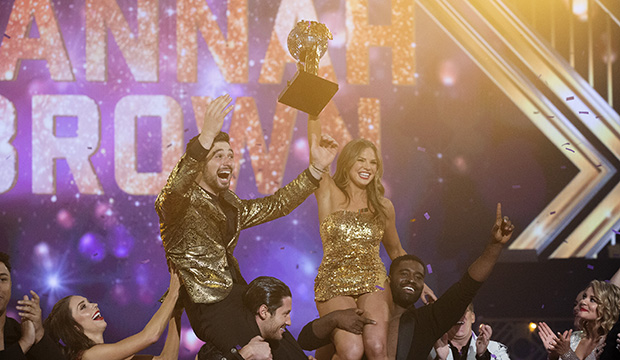 It feels like someone from the “Bachelor” franchise is on “Dancing with the Stars” every season, but in reality (no pun intended), there’s only been eight love-seeking folks who’ve hoofed it on the hardwood in 28 seasons. And Hannah Brown is just the second one to actually win the whole thing.

Brown joins Rycroft as the only Bachelor Nation stars to win “Dancing,” but Brown is the first titular Bachelor or Bachelorette to prevail. Rycroft was never the Bachelorette and was a last-minute replacement on Season 8, taking Nancy O’Dell‘s place after the former “Access Hollywood” host tore her meniscus. That also occurred shortly after the “Bachelor” Season 13 finale, during which Jason Mesnick proposed to Rycroft, but then revealed on the aftershow that he had since broken up with her to date runner-up Molly Malaney.

SEE You’ve no longer got male: Hannah Brown is the first female ‘Dancing with the Stars’ champ in 5 seasons

Outside of Sutter, who has the distinction of being the first person ever eliminated on the show, the “Bachelor” ladies have far and away been better dancers than their male counterparts despite being outnumbered on the casting front. It’s not quantity, but quality, right? All the men — all of whom were Bachelors save for Grocery Store Joe — have been mediocre at best (which was like the peak for Grocery Store Joe) and petered out before the business end of the competition.

The 27th and 28th installments marked the first time “Dancing” has cast “Bachelor” stars on back-to-back seasons. Grocery Store Joe and Brown were hugely popular personalities, so it’s not too surprising, but will TPTB continue to dip back into their synergistic pool, especially if the show remains a one-season-a-year event and they crave that Bachelor Nation buzz?

Arthur Gunn's 'Have You Ever Seen the Rain' cover goes viral for 'American Idol' ... again…

'Top Chef' preview: The ladies bond as a rattled Stephanie confesses being in the bottom 3 was 'wicked…

'The Masked Singer' Super 9 power rankings: Night Angel and Frog are the ones to beat

'Making the Cut' episode 2 recap: Which designers disrespected 'Haute Couture,' according to Naomi…