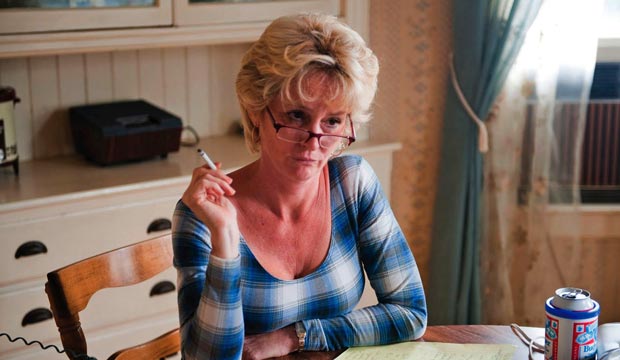 Happy Mother’s Day! What better way to spend time with your mom than a fantastic movie with an Oscar-winning performance. Tour our photo gallery above of the 18 greatest of these films, ranked worst to best. All of them feature winning roles by actresses who play mothers that were pivotal to the plot.

Though there are thousands of these types of films, these performances show a wide array of what it means to be a mother. There’s the courageous mother (“Room,” “Erin Brockovich”), the inspirational mom (“Mrs. Miniver,” “The Grapes of Wrath”), the loving mother (“Moonstruck,” “Guess Who’s Coming to Dinner”) and even the monstrous mother (“Precious,” “I, Tonya”). Lead and supporting actresses include Brie Larson, Shirley MacLaine, Frances McDormand, Brie Larson, Allison Janney, Sophia Loren, Julia Roberts, Joan Crawford and more.

18. THE FIGHTER (2010)
On her second Oscar nomination, Melissa Leo took home the Best Supporting Actress prize for her portrayal of the real-life Alice Eklund-Ward, the hard-driving manager for her boxer son Micky (Mark Wahlberg), who is trained by her other other son, crack addict Dicky (Oscar winner Christian Bale).  Leo’s Alice, the Mama Rose of Lowell boxing managers, shows just enough maternal love amid the toughness to make the relationships believable.

17. MRS. MINIVER (1942)
In the title role of William Wyler‘s inspiration World War II drama, Oscar winner Greer Garson portrayed the title character, a British housewife whose son wants to marry a woman (Oscar winner Teresa Wright) above his class and her husband (Walter Pidgeon) is part of the civilian fleet headed for Dunkirk. Mrs. Miniver gets the drop on a German soldier hiding in her garden and is hailed as a local hero.

16. GUESS WHO’S COMING TO DINNER (1967)
For Stanley Kramer‘s message movie, Katharine Hepburn won the second of her record-breaking four Academy Awards as Best Actress. A liberal couple (Hepburn and Spencer Tracy) have their politics put to the test when their daughter (Katharine Houghton) comes home with a black physician (Sidney Poitier) and asks for their blessing to marry.  It’s a comfortable role for Hepburn, but her chemistry with Tracy brings out her very best.

15. I, TONYA (2017)
Wearing a bird on her shoulder, Allison Janney played a chain-smoking mother from hell in “I, Tonya,” the screen biography of ice skater Tonya Harding, and won her first Academy Award for her larger-than-life performance. Janney courageously traded in her career-long likeability to play Harding’s mom as a selfish, resentful monster for whom nothing that Tonya did was ever good enough.

14. THE PIANO (1993)
Holly Hunter‘s Academy Award-winning performance for 1993’s “The Piano” (her second Oscar nomination that year and her third overall) illustrated the power of maternal love. She played Ada, a mute Scotswoman who is sold into marriage to a New Zealander, and she soon finds herself stranded on a beach with her piano and her daughter Flora (Oscar winner Anna Paquin), whom she would do anything to protect.

13. KRAMER VS. KRAMER (1979)
The role of Joanna Kramer appears only in the first and final acts of Robert Benton‘s Oscar-winning film about a custody battle, but the role is a key one, enough to earn Meryl Streep her first of three Academy Awards. Whereas Joanna could have been played as a cardboard villain, in Streep’s hands, she becomes a conflicted figure, acting to follow her dreams of a new life, yet, at the same time, desperately missing her son.

12. ERIN BROCKOVICH (2000)
When one thinks of Julia Roberts‘ Oscar-winning performance in “Erin Brockovich,” one usually thinks of Erin the political activist, and you’d pretty much be right. But it’s often forgotten that she achieves all that she does while being a single mother, raising three children, including the baby who was prominently featured in the film’s poster. With the support of her biker boyfriend George (Aaron Eckhart), Roberts’ Erin proved that you could change the world and be a good mom at the same time.

11. PLACES IN THE HEART (1984)
Set during the Depression in rural Texas, Robert Benton‘s “Places in the Heart” provided Sally Field with the plum role of a desperate widow who would do anything to save her family farm and keep her children from a life of poverty. With the help of a blind man (John Malkovich) and a black handyman (Danny Glover), she begins to achieve her dreams. While Field’s “you like me” acceptance speech was widely mocked, her Best Actress Oscar win was entirely deserved.

10. THE GRAPES OF WRATH (1940)
In many ways, Jane Darwell‘s Oscar-winning performance as Ma Joad is the heart and soul of John Ford‘s film of John Steinbeck‘s “The Grapes of Wrath.” After losing the family home in the Depression, she leads the family west to seek a new start in California. She never loses that hope, and Darwell’s reading of the line “We’re the people that live. They can’t wipe us out, they can’t lick us. We’ll go on forever, Pa, cos we’re the people” kills me every time.

9. BOYHOOD (2014)
Of all the Oscar-winning actresses on this list, none has had to give a performance as time-consuming as that of Patricia Arquette, whose work as Olivia Evans, the mother in Richard Linklater‘s “Boyhood,” spanned 12 years. What was remarkable was, through two marriages and an up-and-down relationship with her two kids, Arquette’s Olivia is recognizably a consistently caring mother, from the time that filming began in 2002 until its conclusion in 2014.

8. MY LEFT FOOT (1989)
Not only was Brenda Fricker‘s Best Supporting Actress win a bit of a surprise, she was the first Irish actress to ever win an Academy Award. But watching her subtle work in Jim Sheridan‘s “My Left Foot,” there can be little doubt that she was Oscar-worthy. As the mother of Christy Brown (Daniel Day-Lewis), a young man suffering from cerebral palsy, Fricker is sheer embodiment of a parent who refuses to give up on her children, no matter what handicaps might stand in their way.

7. PRECIOUS (2009)
Celebrated comic Mo’Nique took a dark turn as Mary Lee Johnson, the abusive mother of 16 year-old Precious (Gabourey Sidibe). Mary has subjected her daughter to a horrifying torrent of verbal and physical abuse, feeling that Precious caused her to lose her husband who sexually abused Precious when she was little. Mo’Nique attacked the role with such unexpected ferocity that she won the Oscar as the year’s Best Supporting Actress.

6. MOONSTRUCK (1987)
After decades working in the theater, Olympia Dukakis became a movie star at age 56 with her breakout role as Rose Castorini, the wise and witty mother of her widowed daughter Loretta (Oscar winner Cher). Dukakis gives Rose surprising dimension as she realizes that, even at her age, love can still come her way. Her performance earned Dukakis an Oscar and led her to a long and successful career in films.

5. ROOM (2015)
Best Actress Oscar winner Brie Larson delivered a tour de force performance in Lenny Abrahamson‘s film, playing Joy, a mother who has been held captive by a sexual deviant for the past seven years. Her five year-old son Jack (Jacob Tremblay) was born in captivity, and together they spend their lives in what they call Room. Larson dominates every scene that she’s in, as she is torn between ensuring her son’s safety while plotting a way for them to escape Room.

4. THREE BILLBOARDS OUTSIDE EBBING, MISSOURI (2017)
Frances McDormand won her second Best Actress Oscar as fearsome mother Mildred Hayes, who is out to avenge the rape and murder of her young daughter. Her obsession to hold the local police accountable for their inaction on the case, however, threatens the relationship with her surviving son (Lucas Hedges), who is growing more distant by the day.

3. TWO WOMEN (1960)
When she won the Best Actress Oscar for 1960’s “Two Women,” Sophia Loren became the first actor to win an Academy Award for a non-English speaking role. And what a role! Loren plays Cesira, a Roman widow who, fearing for her daughter’s safety during World War II, takes her to what she hopes is the safety of central Italy. There, however, both mother and daughter are traumatized after each is raped. Loren tears up the screen in this, her most famous role.

2. MILDRED PIERCE (1945)
The character of Mildred Pierce has been described as “the mother to end all mothers,” and in Michael Curtiz‘s film, Joan Crawford as Mildred scored an Oscar-winning career triumph. Mildred tries to keep her family afloat with her restaurant business, but her social-climbing brat of a daughter Veda (Ann Blyth), to whom Mildred is devoted, looks down on her mother’s every effort to gain her daughter’s respect.

1. TERMS OF ENDEARMENT (1983)
To my mind, the most memorable movie mother (once you’ve seen her at work) is Aurora Greenway, brought to Oscar-winning life by Shirley MacLaine in James L. Brooks‘ comedy/drama. Aurora is devoted — arguably too devoted — to her daughter Emma (Debra Winger), and although Emma marries and moves away to escape her mother’s controlling nature, there’s a bond between Aurora and Emma that can’t be broken, even when tragedy strikes.