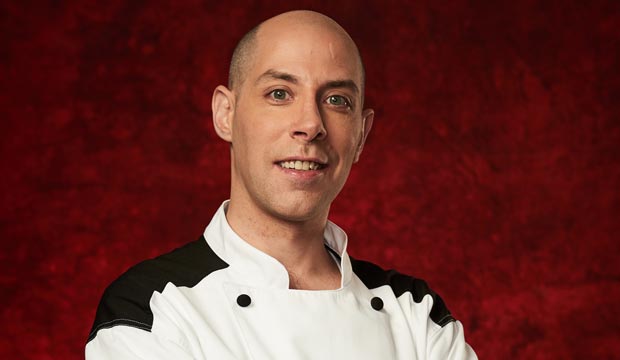 It has been quite a holiday break. Three weeks to be exact. But Fox’s “Hell’s Kitchen” Season 18 is open again and ready for business. When last we watched Gordon Ramsay suffer another bleep-filled breakdown during dinner service filled with fish flaws and mangled beef wellingtons, it was the all-male Red Team that brought the pink to his angry cheeks. As a result, rookie Scotley Innis, who was better at running his mouth than cooking his food, finally hung up his chef’s coat for good. And good riddance, because his bullying ways mostly aimed at veteran  Trevor McGrath (shown above) —  aka “baby girl” in Scotley parlance — certainly weren’t up the standards of a HK winner. But episode 10’s title, “Poor Trev,” suggests that the put-upon player’s woes are far from over.

9 p.m. As a reminder, the remaining Blue Team ladies – Mia Castro. Ariel Contreras-Fox, Heather Williams and Kanae Houston — nailed both the reward challenge and their dinner service. They even finished the restaurant orders for the guys. Eight players total are left.

9:04 p.m. Back in their living quarters, Kanae asks veteran Bret Hauser how many children he has. He says he has a 2-year-old daughter. Then he adds, “A 3-year-old stepdaughter-ish, you would say,” referring to the child of his current lady love. Then comes a bit of TMI: “I’m sure there are more out there I don’t know about. That they don’t want to tell me about, to be honest with you. Maybe like six.” How appetizing is that news?

9:05 p.m. Ah, the strains of Italian folk music played on an accordion wafts through the kitchen area. I think some spicy meatballs and pasta might be in the offing. The chefs are greeted by a smiling Ramsay, who says, “Buongiorno!” He has turned the set into “a cozy Italian café,” the kind of place where a cocker spaniel and a mutt with a weakness for noodles could share a kiss. Bret gets cocky  when he figures it is an Italian challenge, his specialty.

9:08 p.m. That’s maitre’d Marino’s cue to ride in on a bike with a freezer case filled with gelato while showing off his legs while wearing white short shorts. The chefs all sample his wares, chocolate and vanilla. But Ramsay suggests they should also sample other flavors. Hey, it is time for a blind taste test challenge.

9:11 p.m. Everyone is excited  to see the masks come out– save for Trevor. “I have nightmares about this challenge,” he confesses, considering he only got one out of four tastes correct when he first competed in Season 8. “I did so horrible the last time. But this time around, I’m ready for it.” We will see about that, mask or no mask.

9:14 p.m. The team that has the keenest taste buds and gets the most flavors right wins. There is a penalty, though: If a teammate gets two wrong in a row, a fellow teammate gets blasted with spaghetti. If they get three wrong,  marinara sauce will fall from the ceiling. If you blow four in a row, parmesan will be sprinkled generously.

9:16 p.m. A nervous Trev is called up first alongside Heather. At the risk of being smothered with food is Kanae and Jose. First up: carrot gelato. Trev ventures banana, Heather suggests sweet potato. No points. Next is mango. Heather guesses right. Trev goes with lime. Jose gets covered in carbs. Ginger is next but Trev says cinnamon. Now we know why the episode has its title, even if Jose is the one soaked in sauce as the women giggle. Heather tries coriander. Kanae gets shot with pasta. Tomato is the next flavor. Heather  has the right reply but as for Trev? “Pea.” Ramsay is quite amused: “Pea?”  Jose is topped  off with a load of grated cheese.

9:20 p.m. Poor Trev, indeed.  He gets taunted for his utter lack of, well, taste.  Motto and Mia next go head to head  — or rather tongue to tongue, so to speak. Ariel rightly observes that Mia has been a challenge queen throughout the whole season. Here’s hoping her luck continues as Heather and Trevor get to be the next potential food targets. Both Mia and Motto get banana right. Next one is a toughie – pickle. Both are correct. Black pepper? Ditto. Peanut butter? Motto: “Toasted coconut, chef?”  Oops.  As for Mia, she knows her PB. She goes four for four.

SEE the final 10 chefs on ‘Hell’s Kitchen’ Season 18, ranked from worst to best

9:25 p.m. Ariel goes against Bret. Pistachio is the right answer but Bret guesses chocolate chip. Ariel goes with caramel. Garlic of all things is next. Both get it right.  Ah, coconut. Both get that correct. Let’s try jalapeno. Bret utters “sriracha” and Motto is splattered with pasta. Ariel, however, knows her peppers. Heather escapes being a pasta target. Kanae and Jose are the last tasters and Ariel and Bret are in danger of a pasta storm. Coffee is served, and both get it right. But the ladies have won, racking up 10 points vs. the men’s six.

9:30 p.m.  The triumphant gals get another relaxing reward, this time at a Korean spa in L.A. The guys get to clean up the mess left behind after the challenge. On top of that, they have to set up for a special service and make a specific kind of gelato from scratch.

9:35 p.m.  Heather tries to give a weepy Trevor a pep talk, telling him, “Just take a deep breath, man.” His poor pitiful me act isn’t serving him well at the moment. Especially since his three teammates blame him for their current situation. While the ladies are getting oiled and massaged, the men are cleaning up stray strands of pasta and attempting to make gelato  by hand. Trevor somehow  breaks one of the ice cream turners and Bret’s mockery  is getting to him.

9:38 p.m. The ladies return from their spa spree and dinner service awaits.  The restaurant is shut down for a special event that  honors supporters  of St. Jude Children’s Research Hospital and the Waterkeeper Alliance with an all-new five-course Italian menu .  Stars of a certain stature are among the crowd, including Camryn Manheim, Chad Lowe, Dylan Bruno, Sabrina Soto  and Kevin Zegers are in attendance.  The menu’s pan-seared scallops over polenta is being handled by Motto and Mia. Branzino with fennel puree is being cooked by Bret and Ariel. Truffle cabonara is being done by Trevor and Kanae. Veal saltimbocca is under the care of Jose and Heather. And each team member will work on the tiramisu dessert.

9:40 p.m. Mia is the leader of the Blue Team and she vows she will deliver. Meanwhile, Motto is taking charge of the Red Team  and the scallops are a problem yet again. Bret is overseeing the branzino while the women are ready to plate their own fish course. The truffle carbonara is next and  Trev is in charge. He wants “tight sauces.” OK , then. Kanae is in charge of hers and her team’s plates aren’t cohesive as Chef Ramsay notes portion size problems.

9:45 p.m. The men have a better handle on the service than the women. Trevor gets some must-needed praise from Chef Ramsay.  Kanae, however, is having trouble with her team’s cabonara dishes but finally works it out.

9 46 p.m.  The veal saltimbocca course is next.  The Red Team’s tables complain that their veal is raw. Jose was in charge of overseeing the dish.  As Trev notes,  “Jose dropped the ball. Not one was cut into.” A frustrated Ramsay chucks a plate against a wall and takes over cooking the dishes for the men.

9:47 p.m. The Blue Team is serving dessert, tiramisu soufflé,  while the Red Team is trying to catch up.

9:50 p.m.  Gordo is very disappointed. Once again, the men are the losers. He says he will pick two individuals for elimination. Trevor finally stands up for himself, having handled the two courses that weren’t messed up – the cabonara and the dessert.

9:52 p.m. Ramsay asks Trevor who he would put up for elimination. He says Jose and, surprisingly, himself given how his teammates feel about him. Gordo calls out Trev and then sends him back in line. Instead, it is Jose who is leaving.

9: 55 p.m. Ramsay has something to say to all seven chefs who are remaining: “Now listen carefully. I expect all of you to come out of your comfort zone and prevent mistakes from happening.” He then sends them away by saying, “piss off.”

9:56 p.m. Chef Ramsay’s final words on Jose: “On a night when it should have been Hell’s Kitchen giving back to some amazing charities, it was charities giving back Jose’s raw veal.”

Next time: Trevor and Bret put up a wall and have a great fall on an episode called “Devilish Desserts.”