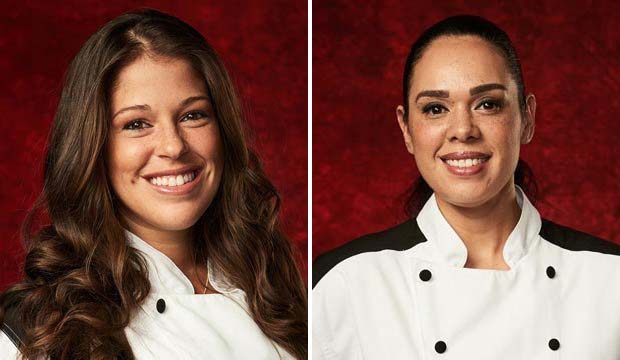 On Part 1 of the finale, rookie Mia Castro squeaked by Season 6 veteran Ariel Fox and won a 5-course meal challenge. Eight of the other chefs who competed this season returned to participate in the dinner service portion of the final showdown on last episode of the season.

Below,  check out our minute-by-minute “Hell’s Kitchen” recap of Season 18, Episode 16, titled  “The Grand Finale” to find out what happened Friday, February 8, at 9 p.m. ET/PT on FOX. This recap is for Part 2 of the big finale episode. Click the following link for our full recap of Part 1.

9:00 p.m.  The narrator guy indulges in some recent nostalgia as he summarizes what was supposed to be “Rookies vs. Veterans” until Gordon Ramsay decided to deep-six the concept and go back to teams divided by gender. “In the most intense season yet, no chef was backing down.” And yet it did come down to one “outstanding “ rookie and one “remarkable” veteran.

9:04 p.m. Mia gathers round with her helpers, Trevor McGrath, Roe DiLeo, Jose DeJesus and Heather Williams, as the put together their dinner service game plan. Mia is planning on making Mofongo, a Puerto Rican dish with fried plantains. Heather can’t even say the word. She then says an even more complicated dish name, and everyone is like “huh?” Roe is like “Peruvian this and Peruvian that.”

9:05 p.m. Ariel is in the shared bedroom with Kanae Houston, Bret Hauser, Motto and Scotley Innis. She tells them it is going to be a kind of modern Mexican menu. She is reviving the dish that helped her win the tableside challenge, albondigas dumpling pozole soup. It’s going to be two pot stickers. She also is going to do her signature brown butter butterscotch with a sweet corn sous vide. Ariel feels the four chefs have confidence in her, especially as she clearly defines what her dishes are. She also knows that the performance of her brigade and how they act as a team will also be judged.

9:07 p.m. Mia is still going over what seems to be a complicated menu. Heather suggests a way to cook her chicken dish. She admits that she and Mia didn’t have the greatest departure. But she says she knows how hard it is when people aren’t 110 percent behind you – which is re-enforced by a Season 16 chef ruining Heather’s chances in that finale. She vows to give Mia her heart and her soul on her station.

9:13 p.m. Narrator guy says, “After a long night, the teams are up early.”  Prep work is under way. Mia, as often happens in the kitchen, is losing track of things. As Roe says, “Mia definitely knows what she wants, but her brain is a big (bleep)-ing mess right now.” She is confused about where all the ingredients are. She is in Trevor’s face because she can’t find her pancetta. Trev’s suggestion? She needs to relax. Heather, meanwhile, calls her “a little dictator.” Trev gives her a one-finger salute. Respect is nowhere to be found. Even Jocky the sous chef doesn’t know what is going on.

9:15 p.m. Ariel’s previous experience as a young chef in Season 6 is proving invaluable. Scotley, who is not one to give out many compliments, is impressed by how vocal, confident and collaborative Ariel is. She even asks her team’s opinions on the dishes they should use. Bret, meanwhile, is making comparisons to Muhammed Ali, Bruce Lee and Mike Tyson: “True champions who won the fight before they stepped into the ring with their opponents.”

9:17 p.m. It’s two hours before the final dinner service.  Narrator guy tells us Ramsay is about to do his last check on Mia and Ariel’s menus. He checks out Mia’s plates, which contain a lot of color. She has sweet pea risotto, a bright yellow Peruvian causa, Monfongo croquettes and other bright and flavorful dishes.

9:20 p.m. Ramsay asks Ariel what the message she is sending to her clients. She says, “This is a modern Latin cuisine with a hint of Asian influence to it. Approachable clean flavors and simple. He tastes the shrimp ceviche rioja. There are chips on the side that are way too salty. He suggests serving three dumplings – he doesn’t like even numbers visually on a plate. Ramsay is also worried about the filling. Then there is the rib cap mole. He says it tastes very pasty, there is no seasoning in there. She has switched out the mackerel she did during the challenge with sea bass. Ramsay is disappointed.

9:25 p.m. He tells Ariel to stop running from success. “The mackerel was a hit. You may have not won the challenge, but you haven’t lost the  finale.” Ariel listens and retains her cool. She is clear and concise about tweaks to her dishes. She goes back to mackerel and tells Kanae to put more duck fat in the dumplings. Both teams are in prep rally mode. Ramsay tells Mia and Ariel that it is their turn to tell maître‘d Marino to open Hell’s Kitchen.

9:27 p.m. Mia and Ariel’s parents are also among the diners.  Mia starts calling out orders. She sounds rather confident, predicting she will surprise chef Ramsay with her performance tonight. Ariel starts calling out her orders. Kanae notices the dumplings are burnt but makes a quick recovery. Marcia Clark, prosecutor on the O.J. Simpson case, is impressed by Ariel’s shrimp. Comedian JB Smoove thinks Mia’s risotto is “pretty damn good.”

9:30 p.m. Oh, oh. Roe’s pork is raw. And everyone is waiting on it, including Ramsay. They are declared done. Ariel starts calling out entrees – two rib caps and two waygu.  She has her eye on Scotley since they haven’t cooked together and he burns the meat. He complains he doesn’t like having someone looking over his shoulder. But he manages to cook the replacements perfectly.

9:33 p.m. Clark’s dining companion says that their chef – Ariel – seems very self-assured. Mia, however, is having doubts about Heather.  But she has done a beautiful cook on the protein. Narrator guy tells us Ariel continues to push Bret to perfection. But his wagyu steak is way off, temperature-wise.

9:36 p.m. Narrator guy tells us after a few bumps, both teams are putting out quality entrees at a brisk pace and living up to Chef Ramsay’s high expectations. Roe messes up her sea bass and now Team Mia is falling behind. Marino complains to Ramsay and he pushes back, telling him he would rather that the food was well-cooked and tells him to “piss off.” Roe finally gets it right. Ariel tells Scotley his mackerel is sexy. That there is some compliment. Bret, meanwhile, burns the chicken skin. He fires up two more and they are raw. Now Ramsay is yelling, telling Bret to wake up.

9:44 p.m. Ariel calls over Bret and helps him to correct his mistake. He brings the chicken over and she tells him they look beautiful.

9:48 p.m. Once again, it is going to be a close call. While Ariel is pacing, Mia is downing ice cream. Ramsay shows up, whispering, “It’s time to get serious.”  He doesn’t normally go into their living quarters. He sees a large mural of himself shouting. He says, “I’m sorry about that.”  He tells the chefs that he appreciates the efforts that they all put in. For one of the first times ever this season, both teams performed a good service. Both Mia and Ariel must say goodbye to the other chefs and the sous chefs Jocky and Christina as they take their leave.

9:50 p.m. Mia and Ariel try to stay calm.  The phone rings, and, of course, it is Ramsay. He says he has made his decision and they should go to his office. There is, of course, a crowd of people cheering them. They go to hear what the fates will be. Ramsay tells them it has been an extremely difficult decision. To Mia, he says, “Never before have we had a chef that performed so strongly across challenges,” adding that she has been one of the most creative chefs they have had. To Ariel, he says, “You have been the most consistent chef across this entire competition.”  She is the only member of either team never to be considered for elimination. Right now, how are you feeling?”

9:54 p.m. The time has come for the pair to each step in front of their doors. Whose will open?

9:58 p.m. As for her opponent, she says, “Mia, I have so much respect for you. You are so talented.” When she gets to Las Vegas and if she wants to come, Ariel adds, “I would hire you in a heartbeat.”

9:59 p.m. Chef Ramsay has the last word: “Since the first time she was here, Ariel has grown 10-fold as a chef. She is fiercely talented, extremely determined and a commanding leader. I could not be more pleased to have her as my executive chef of Hell’s Kitchen in Las Vegas.” They hang her photo  portrait on the wall.