Once there were 16, now there are six. The competition is more scorching than ever on Season 18, “Rookies vs. Veterans,” of “Hell’s Kitchen.” But only five chefs will receive a coveted black jacket from Gordon Ramsay this Friday at 9 p.m. ET/PT on Fox.

The exclusive clip (watch above) for episode 12, titled “Break on Through,” pits four chefs — Motto, Bret Hauser, Heather Williams and Kanae Houston — against one another as they have 45 minutes to whip up a dish that creatively highlights quail, eggplant, baby leeks and cauliflower, all selected by a spin of the wheel. Two chefs will have the chance to earn their jackets during this round.

Kanae is thrilled with the choice of quail since, as she says, “I perfected it in culinary school.” Heather, who spun the wheel, confesses, “I’ve never cooked quail in my life.” Motto spins and the first veggie is eggplant.

Bret smiles and says, “I cook with it all the time — and it’s tattooed on me.” He, of course, lifts his sleeve and there it is, right on his bicep. The third vegetable is cauliflower and Ramsay duly notes the combo is challenging.

SEE ‘Hell’s Kitchen, Season 18, episode 11: A disaster zone of deconstructed desserts as one team is decimated

In a Gold Derby poll, after veteran Trevor McGrath was put out of his misery last week and was sent home after his fellow Red Team members, Bret and Motto, refused to communicate with him during the dinner service, voters picked Ariel Contreras-Fox and Mia Castro as most deserving of a black jacket. One can surmise from this preview that they probably are safe from elimination. Meanwhile, Heather had zero support in the poll and her goose may be cooked if she mishandles the quail.

The stakes are high and the rewards great. The winner will become the executive chef at the new Hell’s Kitchen restaurant at Caesar’s Palace in Las Vegas plus a cash bonus of $250,000. Go into the comment section below and discuss who you are rooting for to take it all? 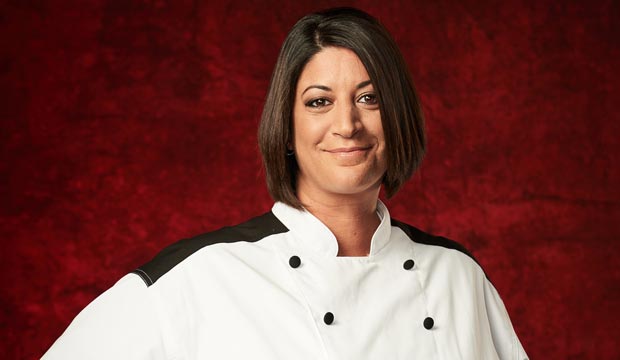