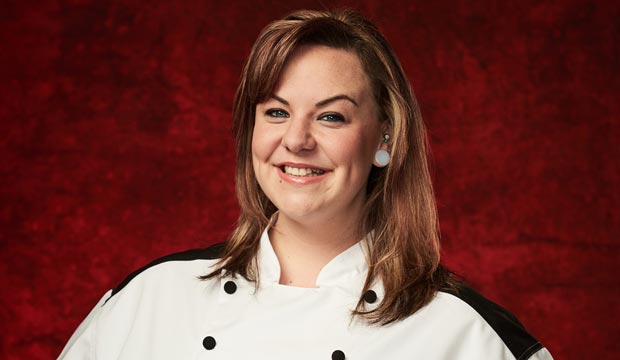 Last week, as “Hell’s Kitchen” Season 18 continues to turn up the temperature on the competition that will conclude with a super-sized two-part conclusion on February 8, all signs pointed to meeting fan expectations of which five out of six remaining chef-testants would move on. First to earn the black jackets were veteran Ariel Contreras-Fox and rookie Mia Castro. Then veteran Bret Hauser and rookie Motto went through on the second challenge.

That left veteran Heather Williams (shown above), who was up for elimination twice, and rookie Kanae Houston, who was never at risk for being cut. going head to head while cooking a surf and turf dish. Kanae, whose previous two dishes outshone those by her rival didn’t know how to properly cook her quail and duck entrees, decided to be inventive with Asian flavors for her pork and prawns. Heather went traditional — some might playing it safe — with filet mignon and lobster.

While Gordon Ramsay thought Kanae made “a strong effort,” some of her flavors were off and she ultimately did not get the final black jacket. She bid farewell with her usual smile.

Anyone who has paid attention to previous episodes knows Kanae was far more professional and inventive in her approach than Heather, who was a runner-up no less on Season 16. Wouldn’t that qualify the rookie more than than someone who had clashed with her teammates this season to be an executive chef at Ramsay’s new restaurant in Las Vegas? Apparently not.

We asked you to tell us how you felt and the majority thought Ramsay made a grave error. In our poll:

*33% thought that Kanae was more deserving, especially since she pretty much breezed through the contest so far.

*31%  also thought Heather’s food was boring and Kanae was the better chef.

*16% stood up for Heather, since she ultimately made the better dish in the deciding round.

*9% agreed that Heather will be gone soon, judging from next week’s preview

But the outrage felt by one of the only truly controversial calls by Ramsay all season — save for when he trashed the whole “Rookies vs. Veterans” concept — boiled over into the comments section. A few stuck up for Heather, but the majority thought it was the wrong call. Some also questioned the choice of Bret, who never met a food he couldn’t make Italian. A sampling:

*Yasminna Moore: “He was wrong as 2 left shoes … I need an explanation about his decision … Kanae has pushed through her struggles and put out a dish that she never did before .. and it was good!!!

*Wanda Gonzalez R Gonzales: “The black jacket was Kanae’s. All Heather did was criticize her fellow contestant. But she made excuse after excuse. … Sorry Kanae was ripped off.

*Karen McHugh: “Kane should have had the black jacket before Bret! He is arrogant and rude. He had a hot temper that could explode at Gordon’s restaurant.

*japispaty: “Chef Houston undeniably had the edge. And she can keep her emotions out of the game. Sorry, Chef Ramsay, but I have to beg to differ as a seasoned Hell watcher. And it was obvious who her fellow contestants thought had it. Not to mention that they genuinely like Kanae, which makes the kitchen run smoother.

*India: “Kanae was a Beast. Heather should’ve went home. I don’t to watch the show anymore.”

Tune in to Fox on Friday for an episode intriguingly titled “An Episode of Firsts” at 9 p.m. ET/PT to see how all five of the remaining chefs work in one kitchen for the first time.