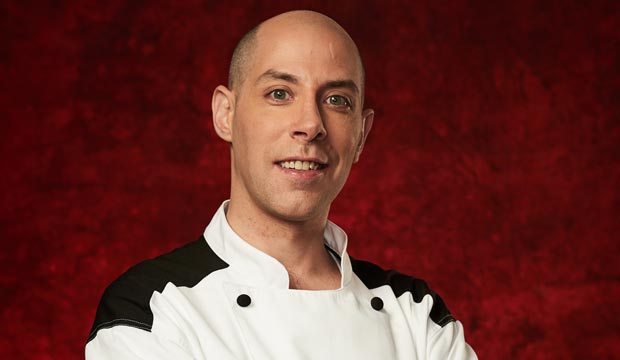 With only seven chef-testants still in the running to win win “Hell’s Kitchen” Season 18, the numbers are not in Trevor “Trev” McGrath‘s favor. At this stage he’s the only person to be nominated for elimination three times by host Gordon Ramsay. One aspiring chef has been nominated twice (Heather Williams) while two contestants have been nominated once (Bret Hauser and Mia Castro). Do YOU think Trev still has a shot at winning an executive chef position at Gordon Ramsay Hell’s Kitchen Restaurant at Caesars Palace in Las Vegas, Nevada? Vote in our poll below.

New York City lead chef Trev previously came in fourth place back in Season 8, ultimately losing to Nona Sivley. (See the “Hell’s Kitchen” winners list.) That season, he ended up being on the bottom a whopping five times, but kept being saved thanks to the people around him faltering even more. Upon finally eliminating Trev in the penultimate episode, Ramsay proudly praised his determination.

Trev returned to this year’s “Rookies vs. Veterans” season with a lot to prove, but he immediately got saddled with a storyline involving his constant arguing with new contestant Scotley Innis. The two men bickered all season long until Scotley was finally sent home last time. With Scotley no longer there to distract him, fans assumed that Trev would rise to the occasion. That didn’t end up happening.

SEE the final 10 chefs on ‘Hell’s Kitchen’ Season 18, ranked from worst to best

Instead, Trev failed during the blind taste test challenge by being the only chef to get all four ingredients wrong. Later on he was nominated for elimination after his poor dinner service that involved under-cooking scallops and veal. Ramsay seemed as though he was going to send home Trev, then decided at the last moment to eliminate Jose DeJesus instead for his failure to lead the veal station.

There are only three chefs still in the running that have yet to appear in the bottom: Ariel Contreras-Fox, Kanae Houston and Chris “Motto” Motto. That gives them a definite advantage heading into the final stretch of “Hell’s Kitchen” Season 18 episodes, especially since Trev, Heather, Bret and Mia have all felt the sting of being eligible for elimination.