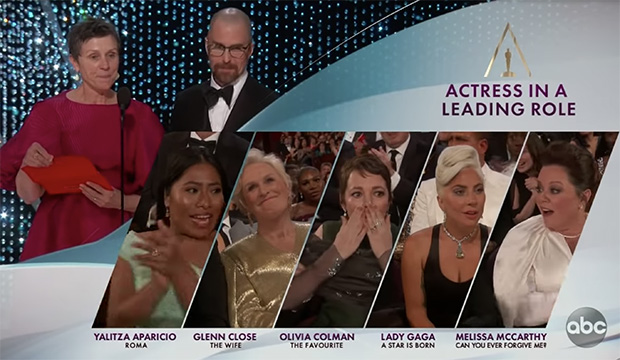 One of the few surprises at the 91st Academy Awards came in one of the categories we least expected. While we all thought this would finally be the Oscar coronation for Glenn Close (“The Wife”) on her seventh nomination, Olivia Colman (“The Favourite”) swiped that Best Actress crown to everyone’s shock (even Lady Gaga mouthed “Oh my god.”) So how did Colman pull off this upset when it certainly felt like it was Close’s time after wins at the Golden Globes (and that speech!), the Critics’ Choice and Screen Actors Guild Awards? Here are seven explanations.

1. Colman was in a bigger and widely seen film
“The Favourite” and “Roma” topped the field with 10 nominations. Close’s bid was the only nomination for “The Wife.” The math is not hard. “The Wife” probably wasn’t on top of most voters’ screener piles, while “The Favourite” was going to be viewed by way more voters with its broad swath of below-the-line nominations. And since the whole membership votes for the winners, advantage Colman.

2. Close’s competition was too stiff
This is related to the first point. Yes, actors can win as the sole nominations for their films — Close would’ve been the 13th woman to do so in Best Actress — but they’re either of the steamrolling “undeniable” variety (see: Charlize Theron in 2003’s “Monster”) or they benefited from a weak field. Close had neither.

Many have likened Close’s potential win to that of Julianne Moore four years ago for “Still Alice.” She was also a sole nominee and it was seen as an overdue win. But Moore’s competition was weak; only one person, Felicity Jones, was in a Best Picture nominee, “The Theory of Everything,” and lbr, she was never winning for that. Two others, Rosamund Pike (“Gone Girl”) and Marion Cotillard (“Two Days, One Night”), were also their films’ only nominations. And the fifth, Reese Witherspoon (“Wild”), hailed from a film with only one other nomination, for Laura Dern‘s supporting turn.

SEE Eight is enough again: Every Best Picture nominee won an Oscar for the 2nd time in expanded era

Close, on the other hand, was up against three people from Best Picture nominees that had at least eight nominations: Colman, Yalitza Aparicio (“Roma”) and Lady Gaga (“A Star Is Born”). Melissa McCarthy (“Can You Ever Forgive Me?”) was the only other person who wasn’t in a Best Picture nominee, but her film had two above-the-line bids in supporting actor for Richard E. Grant and for adapted screenplay.

Moore had the perfect storm for support to coalesce around her to become the frontrunner who none of her weaker rivals could overtake. The second Colman went lead instead of supporting, we all knew she’d be tough competition for Close. Once “A Star Is Born” started imploding, Colman, not Gaga, became Close’s main rival, and unlike Moore versus her field, Close and her film weren’t strong enough to withstand the formidable Queen Anne and her court.

3. Colman had the bigger performance
You can debate whose performance was better, but you can’t deny that Colman had the flashier, scene-stealing turn as the mercurial monarch compared to Close’s quieter work in “The Wife.” Subtle performances can win — Regina King just did it with “If Beale Street Could Talk” — but the Oscars’ default mode usually favors (no pun intended) the showier performances. The more scenery-chewing, the better. Colman’s finely calibrated performance begets a full range of reactions from laughs to frustration to sympathy.

4. This was Colman’s breakthrough performance
We all know the Oscars love honoring ingenues. Colman obviously does not fit the profile of the typical twentysomething starlet who usually wins Best Actress (she is only 45, though for some reason, people think she’s older — she’s younger than Rachel Weisz and has the same exact birthday, Jan. 30, 1974, as Christian Bale). But “The Favourite” was her breakout film. Colman felt “new” to anyone unfamiliar with her TV work (go watch “Broadchurch” and “Peep Show”), and her magnetic performance and charming personality and speeches aided that.

Colman was also the critical favorite, and while that doesn’t always translate into Oscar success, it certainly does not hurt. Close didn’t make much of a dent at all with critics, unlike Moore, who won a couple of regionals and was runner-up at the Los Angeles Film Critics Association and the National Society of Film Critics.

5. The larger British voting bloc
Colman winning the BAFTA was not a surprise, and there’s always been a significant chunk of Brits in the academy. But with the academy having added more international members to its ranks the past few years in the wake of #OscarsSoWhite, that bloc could’ve gotten larger, which could’ve helped Colman.

6. People assumed Close was going to win, so they voted for their, uh, favorite
Being the frontrunner could be a double-edged sword. After taking a majority of the precursors, Close was seen as a lock to finally claim her first Oscar on her seventh try. In numerous anonymous ballots that have been published in the past week, including some of our own, many voted for her or thought she would win for her body of work. One said they would’ve voted for Colman if Close weren’t in the field. But the problem is, when people believe one person winning, they might just decide to vote for the person they actually want to win to throw them a bone: “Glenn is winning anyway, so I’m going to vote for Olivia.”

7. The academy isn’t here for certain career wins
Sure, lots of people have won overdue or career Oscars, but in cases like Al Pacino (“Scent of a Woman,” 1992), Kate Winslet (“The Reader,” 2008), Leonardo DiCaprio (“The Revenant,” 2015) or Gary Oldman (“Darkest Hour,” 2017), there was support for their films, all of which were up for Best Picture. But other times, unless it’s a weak field like Moore’s, the academy flat-out rejects career wins for films they don’t care about, like Lauren Bacall (“The Mirror Has Two Faces,” 1996). Sylvester Stallone (“Creed,” 2015) can fall under this, thanks to the “Rocky” nostalgia, even though his overall career is, well, less than impressive by academy standards. Stallone’s bid was also the only nomination for “Creed,” and Bacall’s was one of two for “Mirror,” the other being song. If Close ever gets a career Oscar win, it’s going to have to be for a stronger film and a Best Picture nominee. Fingers crossed “Sunset Boulevard” sees the light of day.