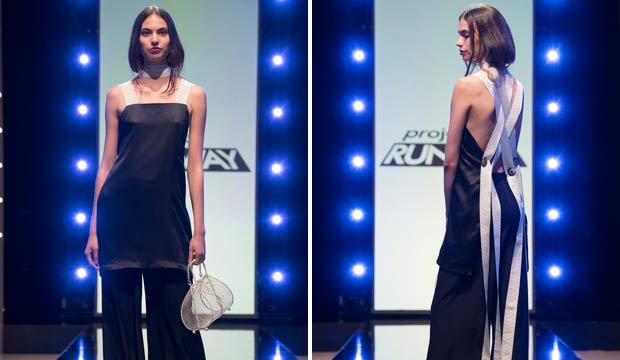 On Lifetime’s just-ended season of “Project Runway All-Stars,” one of the fall-outs from the Harvey Weinstein sexual-abuse scandal was that JC Penney was no longer offering versions of the winning looks.

But on the first episode of “Project Runway’s” return to Bravo, new host Karlie Kloss announced that not only would winning looks be produced on-demand by Nineteenth Amendment,  but fan favorite looks as voted by viewers on @ProjectRunwayBravo’s Instagram story polls would also be made available for purchase on BravoTV.com.

But it is not quite that cut and dry. Right now, the period for pre-sale orders of Tessa Clark‘s knock-out winning outfit from the premiere episode is over (see above) but it is still available for sale.. The glaze pants sells for $135 and the potters apron top with the ribbons down the back is $125. In keeping with “Project Runway’s” embrace of models of all shapes and sizes, the pieces are available from extra small to plus-size 5X. Too bad that lobster-trap purse wasn’t up for grabs.

But I was wondering why other winning looks such as  Sebastian Grey‘s wavy futuristic design from episode 2 and Hester Sunshine‘s top-to-toe red print ensemble from episode 3 weren’t pictured. Turns out only outfits from episodes 1, 5, 7 and 10 are being made available directly after each episode airs via Nineteenth Amendment.

One contestant on Season 17, Lela Orr, who hails from Monroe, Louisiana, and is a graduate from Parsons School of Design, sells her Ferrah brand clothes on the Nineteenth Amendment site. It’s a flowy and feminine line built on the premise of eco-luxury and has been cruelty-free with zero waste since 2018.

This week’s episode 4 is a camp-site-inspired unconventional challenge, whose winning design won’t be sold. But episode 5’s winning outfit will appear on Nineteenth Amendment after the episode airs. Be sure to watch “Project Runway” at 8 p.m. ET/PT every Thursday on Bravo.