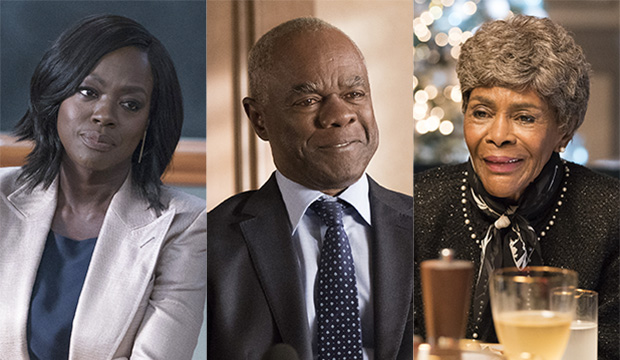 Now that’s how you get away with Emmy nominations! Before Tuesday’s nominations announcement, ABC’s “How to Get Away with Murder” had managed to get recognized by the TV academy for every one of its first four seasons, sometimes with just a single nom, for a total of six. That didn’t change this year as the legal thriller nabbed three bids for its fifth season, which is the most nominations it’s bagged for a single season. And just like its first six nominations, all three were in acting:

Best Drama Actress: Viola Davis
Davis returned with her fifth consecutive Emmy nomination, defying our Best Drama Actress odds, which had her all the way down in 11th place. But hold up, wasn’t she snubbed last year? Yes, she was, in Best Drama Actress. Last year, she reaped a drama guest actress bid for playing her “Murder” character, Annalise Keating, in the “Scandal” hour of the “Murder”-“Scandal” crossover, which means the Oscar champ has now been nominated for playing Annalise Keating every year. Given that track record, which includes a Best Drama Actress win in 2015, in hindsight, we shouldn’t have underestimated Davis. (And with “Murder” ending next season, we should probably just pencil her in for a sixth nomination now.)

It might be difficult for Davis to unseat the other, albeit former, Shondaland vet in her category, Sandra Oh (“Killing Eve”), who never won for any of her five “Grey’s Anatomy” nominations and has yet to take home any Emmy. Oh, who also has a comedy guest bid for “Saturday Night Live,” is seeking to make history as the category’s first winner of Asian descent, just like how Davis was the category’s first black champ in 2015. That said, Davis is clearly a favorite among her peers, not to mention an Academy Award and two-time Tony Award winner, who could get checked off on name alone. Plus, if episodes matter at all, she’d have a killer submission with “He Betrayed Us Both,” the ninth episode of the season, in which Annalise mourns the stillbirth of her child in the past, and deals with a hefty family revelation in the present.

Best Drama Guest Actor: Glynn Turman
This was another nomination our odds didn’t see coming, as Turman sat in 13th place. Since “Murder” is far from an Emmy magnet, it’s surprising that he made it in over the likes of, for instance, James Cromwell (“Succession”), Christopher Meloni (“Pose”), and Denis O’Hare (“This Is Us”), who were all contending for shows that ended up being drama series nominees. But Turman is an Emmy winner, having won on his first try in 2008 in this exact category for his performance in “In Treatment.” Besides, it’s clear by now that voters are only watching and voting for the performances on “Murder.”

And if they saw Season 5, Turman’s turn as Nate Lahey Sr. may have been hard to deny. As an African-American man who was unjustly treated by the American justice system, Turman gave moving performance that served as a reminder of the fact that racism is still alive and kicking. Plus, his character — spoiler alert! — surprisingly dies in the sixth episode, so this might be voters’ first and only chance to reward him for this show (you never know with this show and its flashbacks).

Best Drama Guest Actress: Cicely Tyson
Tyson’s was the only predicted nomination for “Murder,” as she was in fourth in our odds. This is Tyson’s fourth bid in this category for playing Ophelia Harkness, Annalise’s mother; the only year she missed for “Murder” was for the second season in 2016, and that may have been a result of vote-splitting, since she was also submitted for “House Of Cards.”

A 15-time Emmy nominee and three-time winner, Tyson has yet to take home the gold for “Murder.” Despite being the heavy favorite to win for the first season in 2015, during which she lit up the screen with sassy one-liners and an emotional gut punch in her submitted episode “Mama’s Here Now,” she lost to “The Americans’” Margo Martindale. At 94, she’d be the oldest winner in this category in Emmy history. A potential win is not something that should be counted out since Tyson is, well, a living legend who just received her honorary Oscar in November.