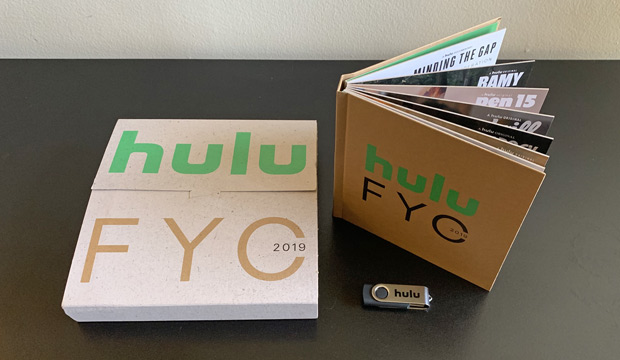 Hulu is doing its small part to protect the environment by making their 2019 Emmy FYC mailer entirely recyclable. The lightweight brown package, which includes a USB drive as opposed to standard DVDs, is made with 100% recycled material including 75-30% post-consumer fiber. The phrase “Being green was always our thing” greets TV academy members on the booklet that highlights seven of the streaming service’s Emmy-eligible programs. Scroll down to find out what specific Hulu episodes were shipped off on the USB drive. Of course, every episode of all of their shows are eligible for Emmys and voters can watch entire seasons on the Hulu FYC website.

Two years ago Hulu made television history when it became the first streaming service to win a main series race. “The Handmaid’s Tale” claimed eight total trophies in 2017 including Best Drama Series, Best Drama Actress for Elisabeth Moss, Best Drama Supporting Actress for Ann Dowd, Best Drama Directing and Best Drama Writing. For its second season the show won another three prizes including Best Drama Guest Actress for Samira Wiley. While three “orphaned episodes” from the end of Season 2 will be eligible at this year’s kudos in select categories, the third season didn’t debut until June 5, which means it will contend at next year’s 2020 Emmys.

Hulu’s Emmy campaign this time around focuses on three limited series (“Catch-22,” “The Act” and “Castle Rock”), three comedies (“Shrill,” “Pen15” and “Ramy”) and a documentary special that notably earned an Oscar nomination earlier this year (“Minding the Gap”).

SEE Nick Antosca (‘The Act’ co-creator) on the real-life mother-daughter tragedy: ‘How could this have happened?’ [EXCLUSIVE VIDEO INTERVIEW]

“Catch-22” — #101 “Episode 1.” The quirky miniseries, based on Joseph Heller‘s novel, stars Christopher Abbott as a World War II soldier who just wants to go home, with Kyle Chandler and George Clooney taking on the roles of colonels.

“The Act” — #101 “La Maison du Bon Reve.” The true-to-life story focuses on Joey King‘s Gypsy Blanchard, a victim of Munchausen by proxy at the hands of her mother, portrayed by Patricia Arquette. The program also features Annasophia Robb, Chloe Sevigny and Calum Worthy.

'Top Chef: Last Chance Kitchen': Game of chicken between Jamie Lynch and Joe Sasto, and it's 'going to…

'Making the Cut' episode 3 recap: Whose 'Collaboration' was a 'recipe for disaster' when designers…

Jeff Probst ('Survivor 40') on Wendell's swagger: It 'worked against him' this time around…

Colton Underwood's 'Bachelor' contract has ended, so he's now spilling the tea: 'There were lines…

Which 'American Idol' runner-up did YOU say was robbed? The votes are in and it wasn't even close [POLL…