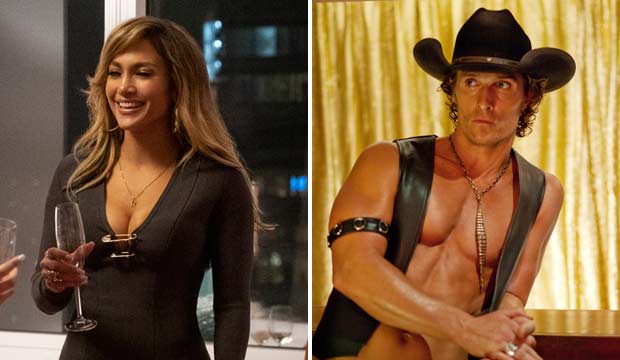 Jennifer Lopez is getting some of the best reviews of her career for “Hustlers,” in which she plays a New York City stripper who survives the financial crisis by fleecing wealthy men. And she’s getting Oscar buzz: as of this writing she’s ranked among our top five contenders for Best Supporting Actress. Could this be the start of a Lopez renaissance? If so, it would be eerily reminiscent of Matthew McConaughey‘s recent career turn that ultimately led him to Oscar gold.

Both Lopez and McConaughey broke through with acclaimed indies during the 1990s: McConaughey in “Dazed and Confused” (1993) and Lopez in “Mi Familia” (1995).

But both of them settled into successful careers that included the kinds of rom-coms that don’t usually get the attention of the motion picture academy: McConaughey in films like “How to Lose a Guy in 10 Days” (2003) and “Failure to Launch” (2006), Lopez in “Maid in Manhattan” (2002) and “Gigli” (2003). Actually, Lopez and McConaughey’s paths crossed in 2001 when they co-starred in the romantic comedy “The Wedding Planner.”

Then audiences came to see McConaughey in a different light in the early 2010s, and his role as a veteran stripper in Steven Soderbergh‘s acclaimed “Magic Mike” (2012) was a big part of it. He won prizes from the Independent Spirit Awards, the National Society of Film Critics and the New York Film Critics Circle, among other plaudits. But the Oscars would make him wait a year longer, ultimately awarding him Best Actor as an AIDS sufferer in “Dallas Buyers Club” (2013).

Like McConaughey in “Magic Mike,” Lopez plays a veteran stripper in “Hustlers,” and the role is reminding critics and audiences of the acclaimed performances that launched her career before she transitioned into mainstream comedies and a successful music career. She has never even been nominated for an Oscar yet, so voters might also see it as a chance to recognize her career-long achievements in the industry; that narrative also helped Sandra Bullock win Best Actress for “The Blind Side” (2009).

“Hustlers” also happens to be a big hit, which never hurts. After two weeks in release it has grossed $62 million domestically against a modest production budget of $20 million. And it strikes a nerve in the #MeToo era, depicting women who enrich themselves by taking advantage of the same Wall Street types who demeaned them for years and nearly destroyed the global economy. The film doesn’t condone their crime spree, per se, but it does empathize with their motives.

Of course, McConaughey didn’t actually get his Oscar for “Magic Mike.” He had to wait a year. Will the Oscars make Lopez wait too, or will they strike while the iron is hustling?