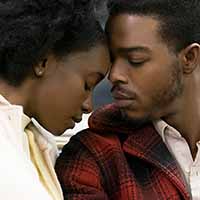 Cinematographer James Laxton earned his first Oscar nomination for his work on Barry Jenkins‘ “Moonlight” two years ago. He could well reap his second for lensing the director’s follow-up film, ““If Beale Street Could Talk.” Their collaborations date back more than a decade. As Laxton explains in our interview, “we’ve got a shorthand now that we can say something very brief and we’ll understand exactly what the other is getting at. There’s no having to explain – we can just get on and dig in.”

Jenkins adapted James Baldwin critically acclaimed novel of the same name. For Laxton, “the crux of the film is this beautiful love story and our feeling was to let that love story be how we view the film. It’s through the idea of love photographically that you’re able to approach these points of conflict in a way that engages with audiences that might not understand those tragedies.”

The trick to capturing that aesthetic, Laxton says, was to look back at cinematic eras gone by and tap into the iconic imagery of classic Hollywood. “The shot where Fonny and Tish come out of the restaurant in the rain and walk away from the camera while we slowly push toward them – to me, that shot is almost like iconic 1940s cinema. It just has a classic, Hollywood glitz to the imagery and we played upon those tropes. We applied that iconic love to these characters – this idea of black love has never really had that effect applied to it.”

This aesthetic, in turn, invited audiences in and made them feel part of the story. It’s this idea of immersive intimacy — whereby the camera plays with characters, brings audiences into the characters’ perspectives, and gets them to identify with the characters in an intimate fashion — that Laxton says he and Jenkins obsessively strove for. “The shots where the characters look directly into the lens – i.e. at the audience – is all about that. There’s something quite magical and powerful about that relationship between viewer and story. For us, we were trying to break down any barriers that exist between our own eyes as audiences and the screen.”