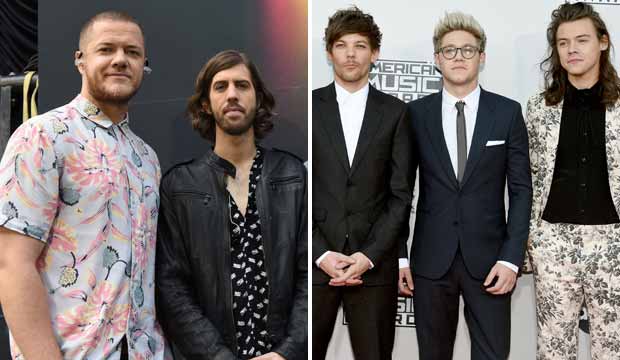 Imagine Dragons are undefeated for Top Duo/Group at the Billboard Music Awards, having won that category both previous times they were nominated (2014, 2018). They’re nominated in that category again this year, and if they can pull off another victory it will be a historic three-peat. The British boy band One Direction currently hold the record with three victories in the category, and now Dragons may join them.

The Billboard Awards are decided by measuring key audience interactions with music like record sales, online streaming, radio airplay, touring success and more, just like the weekly Billboard charts are. One Direction’s rabid fandom propelled them to Top Duo/Group victories three times out of their four nominations (2013, 2015, 2016). In fact, the only time they ever lost was to Imagine Dragons in 2014.

Now the Dragons are poised to swoop in for another prize. According to the combined predictions of hundreds of Gold Derby users, they’re the overwhelming front-runners to win with leading odds of 82/25. They’re backed unanimously by Gold Derby’s Editors who cover awards year-round for the site, as well as by 23 of our Top 24 Users who got the highest scores predicting last year’s Billboard winners.

But since these awards are based on the same metric used to determine the Billboard charts, we should watch out for Maroon 5, who had one of the biggest hits of their career with “Girls Like You” featuring Cardi B. That song spent seven weeks at number-one on the Hot 100 singles chart, and it spent 33 total weeks in the top 10, tying the record set by Ed Sheeran‘s “Shape of You.” As a result, “Girls Like You” alone has five Billboard nominations, which brings Maroon 5 to a total of seven this year. That’s more than any other artist in this category including Imagine Dragons, who have six.

So do Imagine Dragons really have this in the bag, or is this contest much closer than we think?