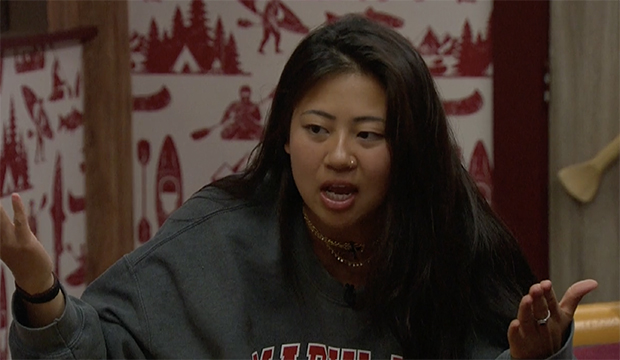 A tearful Isabella Wang was sent packing on Thursday’s live eviction episode of “Big Brother” in a 9-2 vote over the controversial powerhouse Jack Matthews. As Bella sits down to speak with host Julie Chen Moonves, she is immediately reminded how her former Gr8ful alliance turned on her. But who does she feel most betrayed by?

“Personally, I don’t feel that betrayed,” Isabella admits. “I think Christie [Murphy] was someone that we were counting on and I know she was the one to lead the flip. So I guess Christie.”

Last week, Isabella turned on her best friend in the house, Nicole Anthony, when Nicole tried to warn her that Gr8ful was flipping on her. Isabella was furious and went on to launch personal attacks at Nicole. “I was so happy that when I was campaigning I voiced to Nicole that I feel so bad for doing that,” Isabella says. “I should have taken it in more. I should have thought about it harder because everything she said made sense. I should have not assumed things that I heard and shouldn’t have let everyone come up and hear the story. I think ‘Big Brother’ is a numbers game and when everyone was there in the room, we wouldn’t let Nicole in to say her piece. That’s where we went wrong. All of us. Definitely me for sure.”

Another problem for Isabella this season was her inability to keep information to herself. Was that ultimately what led to her downfall? “It’s so hard for me to trust people,” she admits. “I figured if I had all this intel then I would just trust the majority. It was not really intentional, it was just me being bad at the game.”

Despite all of her troubles in the game, Isabella did find a true showmance with Nick Maccarone. Does she think their relationship can survive outside the “Big Brother” house? “I hated him!” she exclaims while reminiscing about meeting him for the first time. “I thought he was so annoying! I think it is real. He’s a great guy. I’ve been through some stuff and he’s been by my side this entire game and I’m so thankful for him and Sam [Smith]. I was so against being in a showmance. I was like, ‘I’ll never be in a showmance,’ and what was it like day five?”

In case Bella was evicted, some of the houseguests filmed goodbye messages that were shown during the live episode. Sam says Bella is “like a sister” to him. Nicole says as game players they haven’t seen eye to eye, but she respects and loves Bella as a person and she accepts her apology. Jack tells her not to worry, if he wins HOH he’ll send home Nick or Sam to join her out in LA. Finally, Nick says he loves her and let’s her know that she’s “perfect” in Mandarin, a language she had been teaching him. In parting, Bella fights through her tears saying, “I’m so blessed to have been part of ‘Big Brother’ 21. I’m just sad because I really respect Jack and he’s playing a great game, but I really just hope Nick and Sam have a chance.”