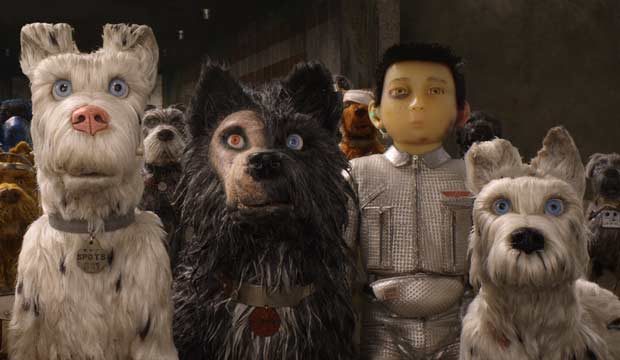 The academy owes Wes Anderson. Quite a bit. The idiosyncratic writer/director has been nominated for six Oscars to date but has yet to win. That could change this year as his stop-motion “Isle of Dogs” is a strong contender for Best Animated Feature. As with his past films, it is uniquely his and is recognizable immediately for his signature style.

His first Oscar nomination was back in 2002 for co-writing the original screenplay of  “The Royal Tenenbaums” with Owen Wilson; they he lost to Julian Fellowes’ “Gosford Park.” He and “Moonrise Kingdom” co-writer Roman Coppola lost the Best Original Screenplay race in 2013 to Quentin Tarantino and “Django Unchained.”

In between those two losses, he contended for his first animated film,  “Fantastic Mr. Fox,” which lost the Oscar to the Pixar pic “Up” in 2010.

In 2015, Anderson reaped three bids for “The Grand Budapest Hotel”  but lost each of those races for Original Screenplay, Director, and Picture to Alejandro Gonzalez Inarritu and “Birdman.”

For a beloved auteur like Anderson, it’s surprising that he’s gone nil for six That’s certainly something that the academy will want to remedy at some point. So why not this year?

“Isle of Dogs” is critically acclaimed, with a stellar score of 86 at Rotten Tomatoes and 82 at MetaCritic. It has won Best Animated Feature from six regional critics groups. While not the box office juggernaut of its main Oscar competition — “The Incredibles 2” and “Spider-Man: Into the Universe” — it made $64 million worldwide. Unlike those two film, it is an original film, not a sequel or a spin-off. It tells a small, simple story rather than one of super-heroes and villains.

This could well be the Oscars that see two other perennial also-rans prevail: six-time nominee  Glenn Close (“The Wife”) is now the Best Actress favorite while five-time contender Amy Adams (“Vice”) is coming on strong in a very competitive charge for Best Supporting Actress. Anderson could ride this wave of sentiment to a win as well.

Be sure to make your Oscar nomination predictions so that Hollywood studio executives and top name stars can see how their films are faring in our Academy Awards odds. Don’t be afraid to jump in now since you can keep changing your predictions until just before nominees are announced on January 22. And join in the fierce debate over the 2018 Oscars taking place right now with Hollywood insiders in our film forums. Read more Gold Derby entertainment news.