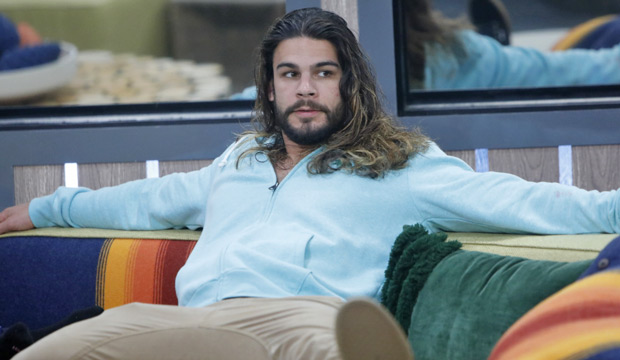 Jack Matthews entered the “Big Brother” 21 house as an alpha male heartthrob with the looks of Aquaman and the charisma of a potential winner. Over the course of his 51 days under surveillance, however, Jack has made some controversial comments that led fans to turn on him and some even formed an online petition urging producers to remove him from the game. On Thursday night’s live eviction episode, Jack was taken out by his fellow housemates instead. By a vote of 6-2, Jack was evicted over his friend Jackson Michie under the HOH reign of Jessica Milagros.

Waiting for Jack outside was host Julie Chen Moonves, who was ready to not only talk game with the 28-year old fitness trainer, but confront him with footage of the terrible things he had said throughout the game. It was awkward, uncomfortable to watch and absolutely brilliant television.

“It happened so fast, Julie,” says Jack when asked about the implosion of his Six Shooters alliance. “Looking back I probably should have trusted Jackson, but I made a decision at the beginning to live and die by trusting Christie [Murphy] and Tommy [Bracco].”

Next, Julie asks if there was anything he had done in the game that he regrets. “You can’t live life in regret,” Jack responds. “You’ve got to stand by the choices that you make whether they’re right or wrong. There is no right and wrong, right?”

“She’s dog s***,” “bitch,” and “it kind of makes me want to stomp a mud hole through her chest” are among the comments shown. Julie then repeats all of those words and asks Jack point blank, “What are your thoughts?” In his response, Jack says the “mud hole” comments were based on something Sam Bledsoe had said on “Big Brother” 20.

“I don’t think there was any personal vendetta behind saying that,” he continues. “My statements were playful in a group of people. I do apologize for what I said and that’s very sincere. I think Kemi was, and is, a very good person. I think this game and being in a 24-hour view of people, you say things. I wouldn’t say that I fully support the the things that I said or the way that I said them. If I could take them back, I would. And I wish that I could have articulated them some other way. It doesn’t take away the fact that I think that Kemi is a wonderful person inside and outside this house.”

Next, Julie addresses the “rice pudding” comment Jack said during a conversation about an Asian-American houseguest Isabella Wang. Jack rebukes any thought that he had racist intentions when he said that. “We spoke earlier in the evening,” he explains. “People were making different recipes [with the slop] and rice pudding was spoken about. Tommy bringing up [slop pudding] in that situation made me say it. It had absolutely nothing to do with her ethnicity whatsoever.”

So what will Jack take away from this experience? “I’d love some time to myself,” he says. “It was quite the experience and it’s like nothing you’ll ever do in life.”

'Big Brother 22' spoilers: Who are the Week 2 nominations for eviction on August 20?

'Big Brother 22' spoilers: Safety Suite winner saves self and one other houseguest from Week 2…