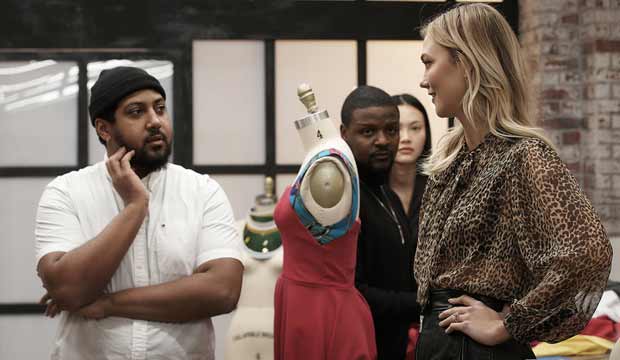 Three strikes and he’s out? Jamall Osterholm got lucky last week on “Project Runway.” He had won the previous week’s challenge, so he had immunity in the “Blame it on Rio” team competition. The judges probably would have sent him home for his failed beachwear design if given the opportunity, but he may not be able to dodge another bullet. He’s the likeliest to be sent home tonight according to our racetrack odds. Let us know what you think by making your predictions here in our predictions center.

Osterholm struggled for two weeks in a row with muddled ideas and unfinished designs, landing in the bottom three in “High Fashion to High Street” with a slapdash Elizabethan-inspired urban look, and then again with an unoriginal, incomplete spy suit in “Power Play.” But the 23-year-old designer, the youngest in the competition, finally found his way in “Elegance is the New Black,” winning the challenge and earning immunity.

But he was frustrated that his immunity would be wasted on a team challenge, and for good reason. He couldn’t take the same kinds of creative risks one might normally take with immunity since his work would determine if his teammates would be sent home. You’ve got to give him credit for a unique idea for a beachwear vacation look: a Lycra swimsuit/dress. But the execution was off, and his model looked like she was tangled in fishing nets.

Since Osterholm had immunity, the judges couldn’t eliminate him, so they had to choose between Venny Etienne and Renee Hill, who had been far more consistent over the course of the series so far. Hill went home even though our readers thought she could win the whole damn competition, and I don’t think there’s any way she would have been ousted were it not for Osterholm’s immunity.

That means Osterholm has a target on his back. He can’t afford another mistake, and our predictions say he’s out of luck: he gets leading odds of 13/8 of being eliminated tonight. He’s followed by Lela Orr (11/4) and Etienne (11/2), who still haven’t won a design challenge yet. Do you agree that Osterholm has gotten his last second chance? Or will he redeem himself from a bad week — again? Check out our elimination predictions graph below. Click on it to see more detailed forecasts for tonight’s show.