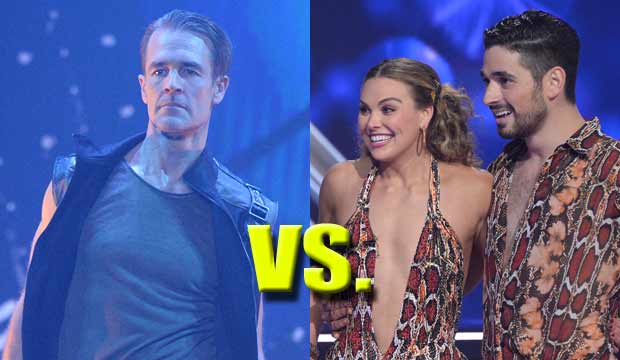 James Van Der Beek is the front-runner to win “Dancing with the Stars” according to the combined forecasts of “DWTS” fans in our predictions center. He has been for most of the season. But now that the show is down to its final five semifinalists, the readers we polled aren’t so sure he’s the celeb who should win. Scroll down to see our complete poll results.

As of this writing Van Der Beek leads our predictions with 31/20 odds of winning the Mirror Ball Trophy. In fact, more of our users are predicting him to win than are predicting the other four semifinalists combined. But has he lost a little momentum? On “Boy Band and Girl Group Night,” Ally Brooke surpassed him as the highest scorer of the season, and his two dances landed him in the middle of the pack on the judges’ leaderboard.

Meanwhile, Hannah Brown has had a much more tumultuous season, but she came this close to getting her first perfect score with her boy band tango. She seems to be back on track, and she was the one who beat Van Der Beek in our poll — but by the slimmest of margins. Brown was backed by 33% of readers, while Van Der Beek had support from 32%. Any closer than that and it would have been a literal tie.

It’s consistent with the results of the show that they’re our readers’ favorites. Who stays and who goes on “DWTS” is determined by combining the judges’ scores with viewer votes, and Van Der Beek and Brown are the only celebs who have never landed in the bottom two up to this point. So we know they have ample support from the viewing audience.

SEEHere are the ‘Dancing with the Stars’ semifinal dances — but will there be a double elimination?

But it’s also a testament to how evenly matched this season is that neither Brown nor Van Der Beek were supported by a majority of our readers. Ally Brooke is the contestant of choice for 20% of readers, followed by Lauren Alaina (11%) ad Kel Mitchell (4%). But a lot can change in tonight’s Semi-Finals. Who are you rooting for? 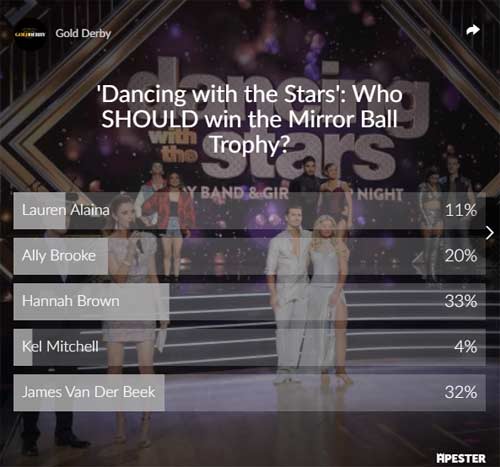