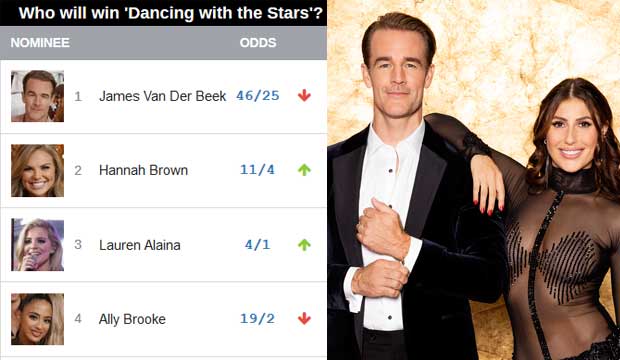 Going into night one of “Dancing with the Stars” season 28, we ranked James Van Der Beek third in our odds for who would win the Mirror Ball Trophy. But now that we’ve seen the first performances from this year’s celebs, Van Der Beek looks like the one to Van Der Beat — pardon the pun. As of this writing he gets leading odds of 46/25 based on the combined predictions of “DWTS” fans who have given us their forecasts here in our predictions center.

Van Der Beek was the final contestant to perform in the season premiere episode; the show often saves the best for last, and this was no exception. Partnered with Emma Slater, who previously won the Mirror Ball in season 24 with footballer Rashad Jennings, he danced a tango (watch below) that judge Len Goodman thought was “terrific” and full of “drive” and “purpose.” Bruno Tonioli called him “charismatic” and “in control.” And Carrie Ann Inaba said, “We have a leading man in the house!”

That performance earned Van Der Beek and Slater the highest score of the night: straight 7s across the board for a total of 21 out of 30. However, the top three on the judges’ leaderboard were separated by only two points, so it doesn’t look like this will be a cakewalk for the former “Dawson’s Creek” actor. “The Bachelorette” star Hannah Brown finished second with 20 points, and now she’s second in our predictions with 11/4 odds. Country singer Lauren Alaina, the initial Mirror Ball front-runner in our predictions, scored 19 points from the judges and now ranks third with 4/1 odds from our readers.

But there was no performance in the premiere that indicates an indomitable front-runner like Laurie Hernandez or Jordan Fisher in seasons past, so this contest may still be wide open.