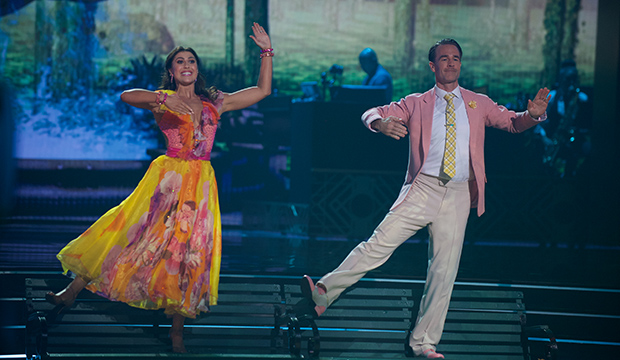 James Van Der Beek is having a pretty great fall. He revealed on Monday’s “Dancing with the Stars” that he and his wife Kimberly are expecting their sixth child. Mazel tov! And he’s killing it so hard on the dance floor that he’s the favorite in our odds to win the whole thing. But his scores haven’t exactly been commensurate with what we’ve seen from him.

The “Dawson’s Creek” alum came out of the gate swinging with an excellent debut tango to top the leaderboard the first week with a 21. He hasn’t reach the summit since, which is not a huge deal in general since it’s nearly impossible to hold onto the top spot the entire season, and there are a lot of great dancers this season. But the individual scores themselves feel a tad low for someone of his skill and performance level, especially compared to those of his competitors. He got a 20 in Week 2 for a decent cha-cha, a 23 in Week 3 for a rumba that Len Goodman found too passionate (an oxymoronic critique if there ever was one), and on Monday, he nabbed a 28 for his quickstep.

Now, the judges were right that his quickstep wasn’t perfect. It arguably was his weakest dance so far (but it was still pretty good) and should not have topped the leaderboard in any scenario. Carrie Ann Inaba, in fact, was on point when she noted how he and Emma Slater were slightly out of sync. Still, the content, technique and quality were there. The straight 7s from the three judges and guest judge Leah Remini felt OK in the moment, but then Karamo Brown got the same score at the end of the night for his tango. With all due respect to the “Queer Eye” star, who had his best performance his week, but those two routines were not on the same level. If that tango deserved straight 7s, then Van Der Beek’s quickstep should’ve gotten at least one 8. Like, he couldn’t even get one from Remini, who, lest we forget, tossed a pity 7 to Lamar Odom. She gave James Van Der Beek and Lamar Odom the same score.

So why are the judges lowballing the Beek? Well, there’s usually one person who gets grossly underscored every season, and sometimes it’s so severe that it feels like nothing they do is ever good enough for the judges (#neverforget Ralph Macchio, Charlie White). The actor may just be that person this go-around. He’s also clearly one of the best dancers this season — and is indisputably the best of the men — so the judges could hold him to a higher standard. They have to be nitpicky with him because he’s so good, you know? And if he does win, no one can criticize the judges for not being tough enough on him.

But they also probably know they can underscore him and he’d still be fine. Van Der Beek is likely pulling in the fan votes and is in no danger of an early elimination if he somehow ends up in the bottom two because the judges would save him over almost everyone, especially the other men. After last season’s debacle with Joe “Grocery Store Joe” Amabile and Bobby Bones, the judges are far more strict this season and even-keeled with their positive remarks. It helps that there are a handful of great dancers — like all the women left — who are delivering week in and week out, so they can present a level and competitive playing field (there was a four-way tie for the top spot this week). TPTB know it’s boring when one person is the clear favorite.

And how many times in the past have the judges prematurely, warranted or not, showered hyperbolic praise onto someone after, like, two weeks and declared them the one to beat? And then sometimes that person is the victim of a shocking elimination. The frontrunner badge is as much a burden as it is an honor. So in a twisted sense, the judges might be doing Van Der Beek a favor by underscoring him because it could incentivize his fans to vote and would give him more of the “improvement” arc that plays so well on the show (he’s in no way an underdog).

But if he continues to crush it and is still pulling in 7s, we need to talk.