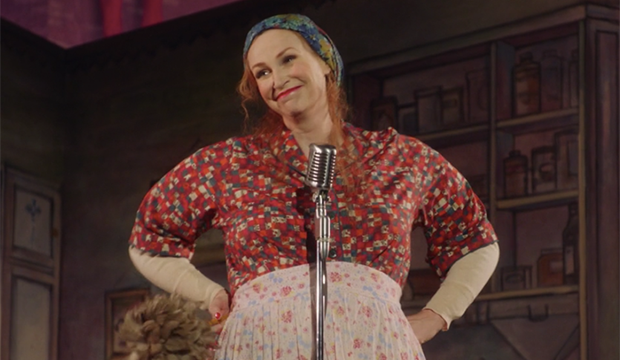 Last year, when Lynch was up for Best Guest Comedy Actress for “The Marvelous Mrs. Maisel’s” first season, she could not overcome Tiffany Haddish’s supernova career trajectory as the “Girls Trip” breakout nailed her hosting spot on “Saturday Night Live.” In fact, “SNL” has had a lock on this category three years running, with Melissa McCarthy taking the prize in 2017 and Tina Fey and Amy Poehler claiming the title in 2016. But the second season of the Amazon Prime comedy provided richer material for Lynch’s Sophie Lennon, a rival old-school stand-up comic who dresses like a frumpy overweight housewife while employing her catch phrase in a Queens accent, “Put that on a plate!”

SEE If you know Susie, then it won’t be a shock if ‘Mrs. Maisel’s’ Alex Borstein wins her 2nd Emmy in a row

Turns out, Sophie — whose self-mocking routines rely on low-brow humor in the vein of Phyllis Diller – is revealed to actually be a slim and trim cultured lady of means. In essence, Lynch is acting for two personas. She is not so much a villain as she is someone who is threatened by the crowd-pleasing racy monologues that youthful Rachel Brosnahan’s Midge traffics in.

Mind you, Lynch is not lacking for trophies given that she has won four Primetime Emmys already. She took a prize home for her supporting role as ruthless cheerleading coach Sue Sylvester on “Glee” in 2010. She also won twice as host of “Hollywood Game Night” in  2014 and 2015. No. 4 was for starring in the short-form program “Dropping the Soap” in 2017.

“SNL” was also in the running again this year for two episodes presided over by Emma Thompson and Sandra Oh. But the skit show’s streak has come to an end. Also up for the Emmy were Maya Rudolph (“The Good Place”), Fionna Shaw (“Fleabag”) and Kristin Scott Thomas (“Fleabag”).