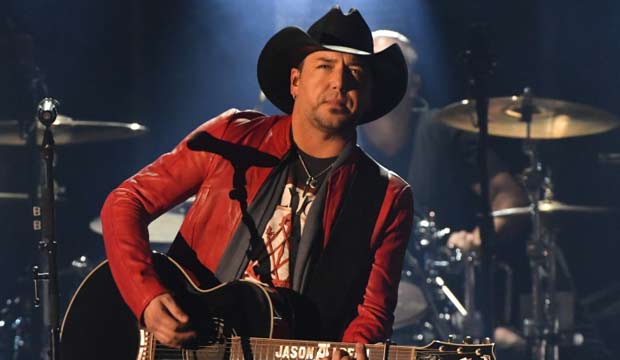 Jason Aldean is already the three-time defending champion for Entertainer of the Year at the Academy of Country Music Awards. He could claim that award again when prizes are handed out on April 7, but he’s guaranteed to go home with another honor before the night’s over. The academy will present him with the Dick Clark Artist of the Decade Award, for which he’ll also perform during the telecast.

Academy CEO Pete Fisher said in a statement, “On behalf of our Special Awards Committee, our Board of Directors and academy staff, we extend our congratulations to Jason and his entire team on this landmark career achievement. We look forward to celebrating Jason’s remarkable career at our 54th annual awards in Las Vegas.”

Aldean responded to the honor by saying, “This is probably one of the coolest awards I’ve ever been given. My heroes are on this list, something I can’t really even wrap my head around being part of. But man I’m proud to be getting it — it’s for everyone who stuck with us and supported us through the years.”

Aldean is only the sixth artist ever to receive the Artist of the Decade award, which was renamed for Dick Clark in honor of the legendary broadcaster after his death in 2012. He follows Marty Robbins (1960s), Loretta Lynn (1970s), Alabama (1980s), Garth Brooks (1990s) and George Strait (2000s).

SEEIt’s 2019, and women are STILL not welcome at the Academy of Country Music Awards for Entertainer of the Year

In addition to his Entertainer of the Year bid this year, Aldean also contends for Musical Event of the Year for “Drowns the Whiskey,” his collaboration with Miranda Lambert. Will he win both of his competitive bids this year in addition to accepting his honorary prize 10 years in the making?