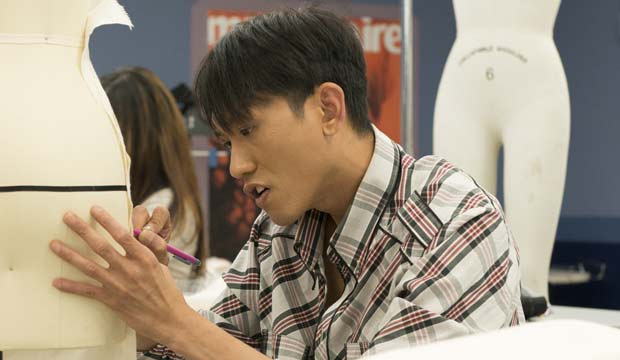 Our readers thought Jasper Garvida should have won last week’s unconventional materials challenge on “Project Runway All Stars,” but this week the judges thought it was time for him to go. It didn’t seem like his fellow designers will miss him much either. But do you think he really deserved to be eliminated in “Of Corsets Fashion“? Scroll down to vote in our poll at the bottom of this post.

This week the designers had to make sophisticated outwear out of underwear, using the style and structure of corsets to create their runway looks. But Garvida was already rubbing his opponents the wrong way before the judges even laid their eyes on the finished products. As we also saw last week in “Buckle Up!” Garvida had a tendency to be, shall we say, demanding with his models, instructing them on exactly how they should present his designs down to the smallest gestures.

Then Michelle Lesniak noticed that Garvida was applying white lace to his black garment with glue, which she considered an affront to the very concept of a fashion design competition. So it already wasn’t looking good for Garvida once the runway show started. And it turned out the judges weren’t fans of his either, but they didn’t even have to be told about the glue or his less-than-model behavior with the models. They just didn’t think his look was flattering.

He paired his black-and-white corseted top with high-slit pants, but Georgina Chapman thought the contrasting colors highlighted every mistake in his design. Isaac Mizrahi didn’t like the fabric. Host Alyssa Milano didn’t like the pants. And guest judge Rebecca Minkoff thought the concept and look were “outdated.”

In the end the elimination was a close call between Garvida and Cynthia Hayashi, whose look was “pretty” but “void of any emotion.” But it was Garvida who got the boot, which makes this the second week in a row when a contestant has been eliminated right after getting a high score in the previous challenge. Did the judges get it right by holding on to Hayashi? Vote below.