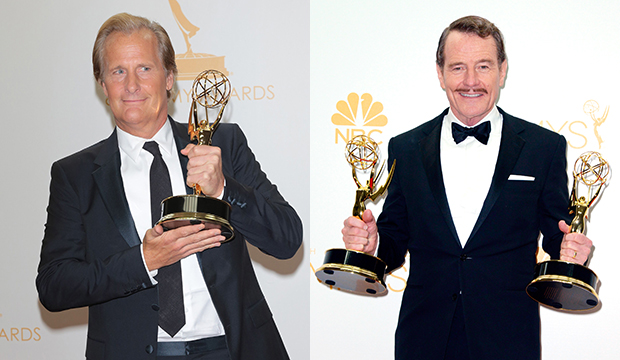 Jeff Daniels (“To Kill a Mockingbird”) and Bryan Cranston (“Network”) are the two Best Actor in a Play frontrunners in our Tony Awards predictions, but this potential showdown would definitely not be the first between them. Daniels and Cranston have faced off twice at the Emmys, with each taking a win. So who will win Round 3 at the Tonys?

The pair first dueled at the 2013 Emmys for Best Drama Actor. Cranston was seeking his fourth win for “Breaking Bad,” while Daniels was contending with the first season of “The Newsroom.” Cranston and reigning champ Damian Lewis (“Homeland”) were favored — there was also a pre-scandal Kevin Spacey for the first season of “House of Cards” — but Daniels pulled off the surprise victory. His win has largely been credited to the lengthy monologue he delivers in the pilot, his episode submission, which is precisely the type of material you want under the old tape system. (Don’t feel too bad for Cranston — he still won an Emmy as a producer for “Breaking Bad”‘s Best Drama Series win.)

A year later, Cranston returned the favor when they were nominated again, though ironically Cranston was not the favorite to win. That was Matthew McConaughey, fresh off his Best Actor Oscar for “Dallas Buyers Club,” which made HBO so confident that it entered “True Detective” as in drama rather than limited series, where the anthology series belongs (current rules prevent “True Detective” from doing this). But the momentum of the final season of “Breaking Bad” carried Cranston to that fourth win, a category record he now shares with Dennis Franz (“NYPD Blue”). This time, he double-fisted with “Breaking Bad”‘s second series prize.

And now they’re on the brink of a rematch at the Tonys for roles that have brought Gregory Peck and Peter Finch Best Actor Oscars. As Atticus Finch, Daniels is currently slightly ahead of Cranston in our Tony odds, at 69/20 to 37/10. Having first started his “Network” run in London in 2017, Cranston has already won an Olivier Award for his performance as Howard Beale, but Daniels hasn’t competed anywhere yet since “To Kill a Mockingbird” opened on Broadway in December.

Cranston is the only Tony winner of the two, earning Best Actor in a Play honors in 2014 for “All the Way”; he’d be the ninth person to win the category twice. A two-time nominee in the category for “God of Carnage” (2009) and “Blackbird” (2016), Daniels lost to Geoffrey Rush (“Exit the King”) and Frank Langella (“The Father”), respectively.

Paddy Considine (“The Ferryman”), John Lithgow (“Hillary and Clinton”) and Ethan Hawke (“True West”) round out our predictions.