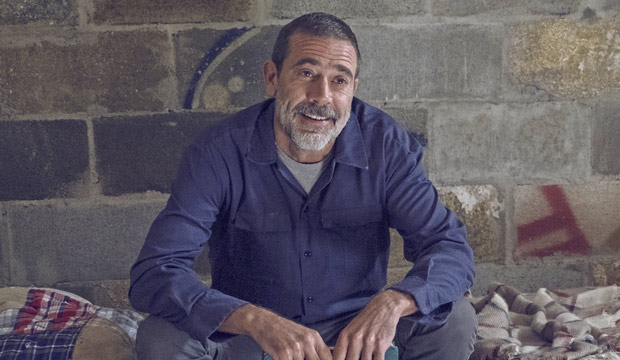 When last we saw bad boy Negan (Jeffrey Dean Morgan) in the Season 9 finale of “The Walking Dead,” he had a chance to escape his imprisonment at Alexandria but opted instead to save young Judith (Cailey Fleming). Morgan now confirms that fans will be seeing more of Negan in Season 10, which premieres October 6 on AMC. “He’s going to surprise you in ways that you’re not gonna be ready for as an audience, whether that be good things or downright awful things,” Morgan teased in an interview during Sunday’s “Talking Dead” preview special. “That’s the beauty of him. You don’t know what you’re gonna get. That’s why I’m still here in Season 10 as an actor, because how lucky am I?”

“This is gonna be a really busy year for Negan,” Morgan noted about his villainous character. “He’s been allowed to have a little bit of freedom within the community. That doesn’t mean a lot, other than the fact that Negan has been in jail so now he is out and he’s kind of amongst the community. Meanwhile, he’s on lock-down at night so he still sleeps in his jail cell, which I think he’s okay with.”

Morgan added, “He’s getting more and more freedom and with that comes more interactions with some of our favorite actors on this show.” Perhaps viewers will see even more scenes between Negan and Michonne (Danai Gurira) in Season 10? Don’t forget, the last time these two arch enemies met she thanked him for saving Judith and he admired her decision to cross Alpha’s (Samantha Morton) border.

SEEMelissa McBride breaks her silence on shocking ‘The Walking Dead’ death: ‘How much more’ can Carol take?

Showrunner Angela Kang revealed Negan is “trying to figure out his place in this new world,” ever seen being captured by Rick’s (Andrew Lincoln) group all those years ago. “Negan is a guy who likes to be in the middle of things and being in a jail cell means he’s definitely not in the middle of things. When he saved Judith that was an unexpected bit of redemption for him. He could have taken the opportunity to try to run, who knows what he could have done, and he kind of acted the hero which is not necessarily what people would have expected.”

Kang explained how it’s been “really fun” for the writers to play with both sides of the uber villain, and hinted that the show might be “releasing the Negan” sometime in “TWD” Season 10. Hmm, might Negan be the one who ends the current war between the survivors and the Whisperers? Time will tell.