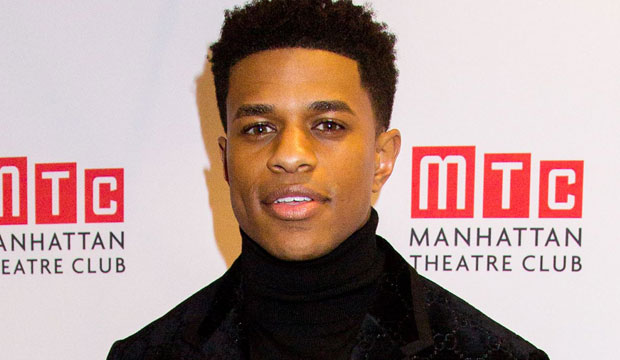 Pope played the lead role of Pharus Jonathan Young in “Choir Boy.” The actor was involved with the production since Manhattan Theater Club commissioned the work in 2013. Written by Tarell Alvin McCraney (“Moonlight”), the coming of age story follows Pharus, the leader of the student choir at a boy’s prep school. He learns to confront bullying, his sexuality, and identity, and gets to sing a slew of glorious gospel songs.

Critics heaped praise on Pope, declaring a new Broadway star was born. David Rooney (The Hollywood Reporter) thought Pharus was “played with a mix of defiant pride, cheeky flamboyance, touching confusion and gnawing erosion of his self-worth in a galvanic performance from bright new talent Jeremy Pope.” Praising the musical sections, Steven Suskin (New York Stage Review) declares “What is most significant about these spirituals is that they are so exceptionally performed by Pope.” Suskin goes on to call the performance “remarkable” and wonders aloud why it took so long for Broadway to scoop up the young actor.

Pope left “Choir Boy” to join the cast of “Ain’t Too Proud – The Life and Times of the Temptations.” The productions were so close together that Pope only had 3 days between his final performance as Pharus and his first preview for “Ain’t Too Proud.” As original Temptation Eddie Kendricks, Pope shows off even more of his striking tenor voice and slick dance moves to continually sold out houses.

Pope is eligible at the Tonys for Lead Actor in a Play (“Choir Boy”) and Featured Actor in a Musical (“Ain’t Too Proud”). Reaping nominations for both roles will be difficult. It’s a feat that has only been achieved five times in Tony history.

As of this writing, Pope has the backing of one expert, one editor, and five of the Top 24 users to land a nomination for “Choir Boy.” In our combined odds, that’s good enough for ninth place.

With regards to his featured role in “Ain’t Too Proud,” Pope has the backing of two experts, one editor, and two of our Top 24 users. That translates to eleventh place in the combined odds. Notably, he must compete against his scene stealing co-star Ephraim Sykes in this category, who sits just above him in our odds.

Perhaps users should take a second look at his chances after an impressive few days on the awards circuit. Pope was one of 50 actors nominated for the Drama League’s Distinguished Performance Award, a category that includes both Broadway and Off-Broadway performers. He was cited for his work in both “Choir Boy” and “Ain’t Too Proud.”

Perhaps even more impressively, he scooped up an Outer Critics Circle nomination for Lead Actor in a Play for “Choir Boy.” While this organization does not overlap with Tony nominators, it is worthwhile to note that he is only one of two Broadway actors nominated in the category (the other being Bryan Cranston in “Network”). That voters opted for Pope over the likes of Jeff Daniels, Adam Driver, Tracy Letts, Paddy Considine, and Nathan Lane is a show of major strength, especially considering “Choir Boy” ended it’s run months ago and those men’s shows are currently running. The Lead Actor in a Play category is one of the most competitive Tony races in recent memory, but Pope’s dynamite year is clearly making the industry take notice.