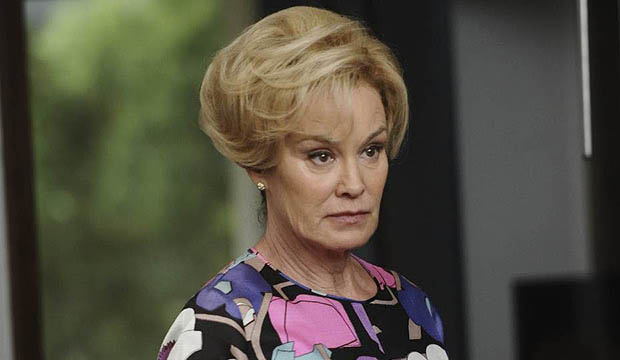 The TV academy announced on Tuesday, April 9 that “American Horror Story: Apocalypse” would be forced to compete as a drama series (not as a limited series) at this year’s Emmys because it features “continuing story threads, characters and actors reprising those same character roles from previous seasons.” While FX’s horror anthology series will now face increased competition from the likes of “Game of Thrones,” one person in particular may benefit from this last-minute rule switch: Jessica Lange.

Since Lange only briefly appeared in two episodes of “AHS” Season 8, she didn’t meet the strict time requirements needed to compete in the supporting actress category for a limited series. However, now that the program is being forced into the drama series races, that unlocks the guest categories and makes Lange a default front-runner for Best Drama Guest Actress as chain-smoking nosy neighbor Constance Langdon.

After a four-year break, Lange made her triumphant return to the “AHS” franchise during the sixth episode of “Apocalypse,” directed by series lead Sarah Paulson. In “Return to Murder House,” Madison (Emma Roberts) and Behold (Billy Porter) traveled to the iconic haunted house from Season 1 to try to learn more information about the antichrist, aka Michael (Cody Fern). While there, Constance appeared as a ghost, revealing that she’d died since we last saw her in “American Horror Story: Murder House.”

The actress then returned for a few minutes in the season finale, “Apocalypse Then,” which ended with Mallory (Billie Lourd) going back in time and killing Michael before he could become the antichrist. Michael died in Constance’s arms on the street after she made the bold decision not to let him perish inside the Murder House, thereby preventing him from becoming a ghost.