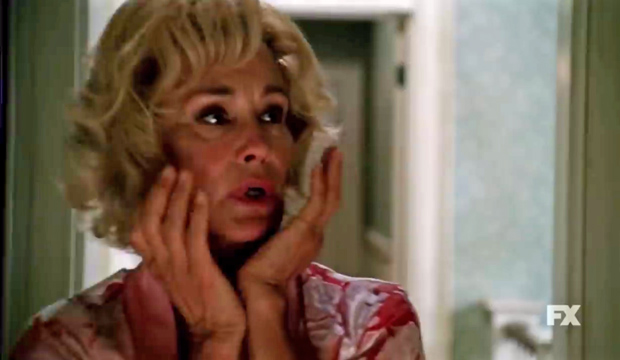 “I’m Constance Langdon and this is my f***ing house,” hissed Jessica Lange during her highly anticipated return to “American Horror Story” in last season’s “Apocalypse” episode “Return to Murder House.” Well, we have a feeling Lange’s own house will need a bigger fireplace mantel in the coming months thanks to an Emmy rule switch that resulted in “AHS” moving over to the drama races because it features “continuing story threads, characters and actors reprising those same character roles from previous seasons.” Ironically, Lange’s reprisal was too brief to be eligible in the limited series categories, but now that she’s a contender in Best Drama Guest Actress she’s a front-runner to win.

As of this writing Lange is predicted to take home her fourth career Emmy Award by three Experts from major media outlets, one Gold Derby staff Editor who covers awards year-round, six of our Top 24 Users who did the best predicting last year’s noms, three of our All-Star Users who excelled the past several years, and more than 250 Users like you. That results in overall racetrack odds of 9/2, putting Lange in second place on our winner’s chart behind only Cherry Jones (“The Handmaid’s Tale”) who has leading 39/10 odds.

After a four-year break, Lange made her triumphant return to the “AHS” franchise during the sixth episode of “Apocalypse,” directed by series lead Sarah Paulson. In “Return to Murder House,” Madison (Emma Roberts) and Behold (Billy Porter) travel to the iconic haunted house from Season 1 and meet chain-smoking nosy neighbor Constance as a ghost, who reveals that she’d died since we last saw her. Lange then returned in the season finale, “Apocalypse Then,” which ends with Mallory (Billie Lourd) going back in time and running over Michael (Cody Fern) before he can become the antichrist. Michael later dies in his grandmother Constance’s arms.

On the 2019 Emmy ballot Lange faces off against no less than four guest actresses from “AHS: Apocalypse”: Connie Britton as Vivien Harmon, Joan Collins as Evie Gallant and Bubbles McGee, Naomi Grossman as Samantha Crowe and Stevie Nicks as herself. Other potential Emmy nominees in this category, according to Gold Derby’s racetrack odds, are Phylicia Rashad (“This Is Us”), Cicely Tyson (“How to Get Away with Murder”), Carice van Houten (“Game of Thrones”), Laverne Cox (“Orange is the New Black”) and Andrea Martin (“The Good Fight”).