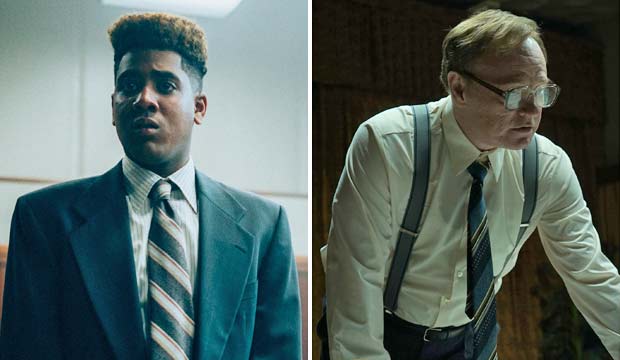 Before the Emmy nominations were announced it looked like the top contenders for Best Movie/Mini Actor were Oscar champs Mahershala Ali (“True Detective”) and Sam Rockwell (“Fosse/Verdon”), with Hugh Grant (“A Very English Scandal”) and Oscar winner Benicio Del Toro (“Escape at Dannemora”) right behind them. All four of them made the cut, but now that we’re predicting the winners, it looks like a battle between Jharrel Jerome (“When They See Us”) and Jared Harris (“Chernobyl”). So what changed?

We thought Jerome would actually miss out on an Emmy nomination by a hair: he ranked seventh in our nomination odds. That may be because he’s not as well known as some of his competitors and his screentime in “When They See Us” as wrongly convicted Korey Wise is so back-loaded — his big showcase episode comes at the very end. Would enough voters make it all the way through to see his best work?

This Emmy category has skewed towards younger breakthrough stars in the last two years with wins for Riz Ahmed (“The Night Of”) and Darren Criss (“The Assassination of Gianni Versace”). And since “When They See Us” dominated the acting categories with eight total nominations (one of the biggest acting sweeps ever for a limited series), our Experts are a lot more confident about his chances to win now that he’s been nominated.

SEEAge is just a number: ‘When They See Us’ star Jharrel Jerome aiming to be first man in his 20s to win his Emmy category

But don’t count out Harris. Like “When They See Us,” “Chernobyl” did better than we expected in the nominations by earning 19 bids, more than any other long form program. So while Harris only ranked fifth in our nominations forecasts, he’s now a close second behind Jerome with 4/1 odds and the backing of five Experts: Debbie Day (Rotten Tomatoes), Kelly Lawler (USA Today), Christopher Rosen (TVGuide.com), Michael Schneider (Variety) and Kaitlin Thomas (TVGuide.com).

Harris is already established at the Emmys, earning a nomination in 2012 for his supporting turn on “Mad Men,” so that’s one advantage he has over Jerome. But his role as a stoic nuclear scientist in “Chernobyl” isn’t as showy as Jerome’s performance. And “Chernobyl” wasn’t embraced by the actors branch nearly as much as “When They See Us” was, earning just two other bids for supporting co-stars Emily Watson and Stellan Skarsgard, though “Chernobyl” isn’t as much an ensemble acting showcase as “When They See Us.”

It shows what a difference the nominations can make when it comes to picking winners. Sometimes getting a bid is the hardest part, but now that Jerome and Harris are in, there may be no stopping them.

MAKE YOUR PREDICTION: Who'll win Emmy for Best Movie/Mini Actor?
To save your prediction, you must log in to Gold Derby. Click here to sign in with existing account -- or create a new one.
PREDICTthe Emmys now; change them until September 22