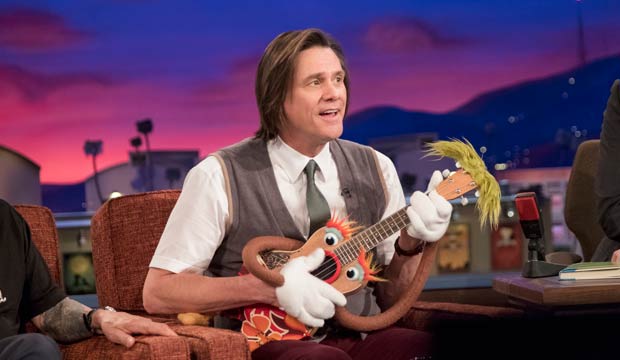 After racking up big box office for nearly three decades, funnyman Jim Carrey could crack the Emmy race this year with his starring role in the new Showtime series “Kidding.” Carrey has already earned a Golden Globe nomination for his series, which casts him as a popular children’s puppet show host trying to piece his life back together after the sudden death of his son. That was his seventh career bid from the HFPA; he previously won prizes for his dramatic performances in “The Truman Show” and “Man on the Moon” and competed for his comedic roles in “The Mask,” “Liar Liar,” “How the Grinch Stole Christmas” and “Eternal Sunshine of the Spotless Mind.” (“Kidding,” incidentally, reunites him with “Sunshine” director Michel Gondry, who helmed six of the 10 episodes.)

On the TV side, Carrey earned his first Emmy nomination last year for producing the documentary “Jim & Andy: The Great Beyond,” which delved into his transformation into performance artist Andy Kaufman for “Man on the Moon.” He hasn’t been recognized as an actor yet, even for his breakout role in the sketch series “In Living Color.” That could change for his well-received turn in “Kidding,” especially as the TV academy has shown a recent affinity for actors transitioning from the big screen to the small.

He certainly has the critical bonafides to back up an Emmy bid. Ben Travers (IndieWire) praises his “committed turn” as “immediately convincing and endearing.” Alan Sepinwall (Rolling Stone) describes him as “compelling throughout, equal parts haunted and sweet, inappropriate and generous.” And Richard Roeper (Chicago Sun Times) calls him “brilliant and with the possible exception of the late Robin Williams, there’s no other actor of the last 30 years better suited to playing this type of man/child character who engenders such good will and displays near saintly qualities — but also gives us the heebie-jeebies.”

Carrey would be the latest movie star to crack the Best Comedy Actor lineup as of late. The most successful has been Oscar nominee Alec Baldwin (Best Supporting Actor for “The Cooler”), who won Best Comedy Actor for “30 Rock” in 2008 and 2009 and competed again in 2007, 2010, 2011, 2012 and 2013. He won a third prize in the supporting race for playing Donald Trump on “Saturday Night Live” in 2017, contending again in 2018. Unlike Carrey, Baldwin was already an Emmy fave by the time he finally won, racking up bids for his performances in “A Streetcar Named Desire,” “Path to War” and “Will & Grace” and for producing “Nuremberg.” He was nominated three more times for producing “30 Rock,” once for hosting “Match Game” and once for producing the 2010 Oscars.

Matinee idol Charlie Sheen (“Platoon,” “Wall Street”) turned to television with the multi-camera sitcom “Two and a Half Men,” which brought him four consecutive Best Comedy Actor bids (2006-09). Like Baldwin, Sheen already had a solid television career in addition to his movie work, winning a Golden Globe for his lead role on “Spin City” in 2002. (Sheen took over for star Michael J. Fox when he left due to his battle with Parkinson’s disease.)

After scoring an Oscar nomination as Best Actor for “Hotel Rwanda,” Don Cheadle turned to the small screen with “House of Lies,” earning four consecutive bids as Best Comedy Actor (2012-15). He’d already enjoyed a successful TV career prior to this, competing for his roles in “The Rat Pack,” “A Lesson Before Dying,” “Things Behind the Sun” and “E.R.” In fact, he could return to the race this year with another freshman Showtime show, “Black Monday.”

William H. Macy has competed five consecutive times for the long-running Showtime series “Shameless” (2014-18). Prior to that, his film career took off with an Oscar bid for “Fargo.” Macy has always moved back-and-forth between movies and TV, winning Emmys for writing and starring in “Door to Door” and contending for “E.R.,” “Sports Night,” “A Slight Case of Murder,” “Stealing Sinatra,” “The Wool Cap” (acting and producing) and “Nightmares & Dreamscapes: From the Stories of Stephen King.”

So, will Carrey join this elite group? According to Gold Derby’s racetrack, he’s got a good chance of cracking the lineup, with sixth place odds of 12/1. And if recent Emmy history is any indication, he should start dusting off that tux right now.

MAKE YOUR PREDICTION: Who'll win Emmy for Best Comedy Actor?
To save your prediction, you must log in to Gold Derby. Click here to sign in with existing account -- or create a new one.